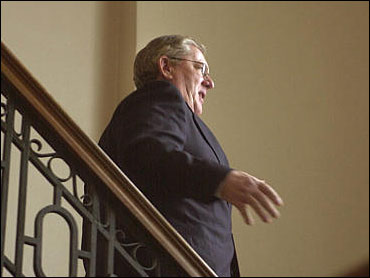 Rep. Bill Janklow planned the official close of his political career to coincide with his sentencing in the traffic death of a motorcyclist, a decision that also means the special election to fill his seat will be held during South Dakota's June 1 primary.

"The speed of this verdict - it came less than five hours after the jury began deliberating - tells us that jurors weren't remotely close to buying the notion that Janklow's medical condition caused the crash," says CBS News Legal Analyst Andrew Cohen. "The defense gambled with that theory - and lost."

Janklow said nothing as he left the courthouse but within two hours of the verdict, the South Dakota Republican announced his resignation from Congress.

"I wish to inform you that because of present circumstances, I will be unable to perform the duties incumbent on me in representing the people of South Dakota as their U.S. representative," Janklow, 64, wrote in a letter to be delivered Tuesday to House Speaker Dennis Hastert.

"Therefore I wish to inform you that I will resign from the House of Representatives, effective Jan. 20, 2004."

That's the same day he's scheduled to be sentenced.

Second-degree manslaughter carries a maximum penalty of 10 years in prison and a $10,000 fine. The conviction would have prompted an investigation from the U.S. House ethics committee without the resignation.

Monday's events put pressure on former U.S. Rep. John Thune, considered the GOP's most formidable potential candidate, to decide whether to run for the Senate or House, analysts said.

The timing of Janklow's resignation means the special election to fill the House vacancy will be held in conjunction with South Dakota's June 1 primary. Both parties must nominate candidates by April 6.

Democrat Stephanie Herseth, who lost to Janklow in 2002, said in October she intends to run for the House again but won't make a formal announcement until after the first of the year.

Some Republicans want Thune to run for Janklow's seat instead of the U.S. Senate because they believe he stands a better chance against Herseth than against Senate Democratic Leader Tom Daschle, whose seat is up for election in 2004.

After Monday's verdict, Janklow hurried out of the courthouse to a waiting vehicle and refused to answer questions. None of the lawyers would comment, nor would Janklow's son, Russ, who has served as the family's spokesman.

The defense has about a month to appeal.

Outside the courtroom, Marcella Scott, the victim's mother, said she is satisfied with the verdict.

A statement released by the Scott family said, in part, "We are satisfied that the correct verdict was reached. The cause of Randy's death is no longer in dispute. ... We will continue the difficult process of coming to terms with Randy's death."

Janklow won statewide office six times and lost just one election, a 1986 U.S. Senate primary. He served as South Dakota's governor for 16 years before being elected to the House in 2002.

Janklow's lawyer wanted jurors to convict his client of two minor traffic charges and acquit him of second-degree manslaughter and reckless driving. The defense said at the time of the crash, Janklow was having a diabetic episode.

But prosecutors Roger Ellyson said Janklow's driving was like "a deadly game of Russian roulette. On August 16, Randy Scott took the bullet."

The Janklow conviction was met with mixed feelings by many in South Dakota.

"It's a sad end to a good political career," said Denny Erickson, owner of Fat Boy's, a bar a block away from the courthouse in Flandreau.

Stan Peterson of Sioux Falls said Janklow was treated fairly during his trial. "I'm glad he got hung. He deserves to get what he got."

Jim and Dorothy Anderson of Miller, S.D., said Janklow did the right thing in resigning. They, like many others who reacted to Janklow's convictions, doubt he will spend any time in prison.

Dorothy Anderson said she thinks Gov. Mike Rounds should pardon Janklow because he has been publicly disgraced and that is punishment enough.

"I think Governor Rounds should pardon him because he didn't go out and deliberately do this," she said. "Things can happen. That's why they're called accidents."

When asked, Rounds said late Monday night that he has a policy of refusing to consider pardon requests within the first year of a conviction because the courts retain jurisdiction during that time. A circuit judge could modify the sentence, he said.