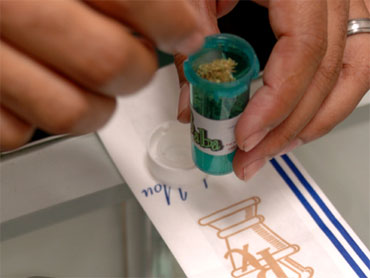 On Monday, news reports offered the latest piece of evidence that the country is moving toward greater acceptable of medical marijuana use: The federal government sent guidelines instructing prosecutors not to focus on prosecuting state-sanctioned medical marijuana users and suppliers.

Fourteen states now allow at least some medical marijuana usage; Monday's news, as Andrew Cohen notes, means that "tens of thousands of Americans now are free from federal persecution and prosecution for conduct that is completely legal in their own states." In addition, a new poll finds that 44 percent of Americans now favor outright marijuana legalization, marking a new high.

With that said, it seems reasonable to wonder whether medical marijuana is – or will ever be – covered through health insurance plans, like a typical prescription drug.

First, consider the present: Susan Pisano of America's Health Insurance Plans, the trade group that represents nearly 1,300 companies, told Hotsheet the group does not "know of any coverage for medical marijuana among our member companies."

That comports with the opinion of Bruce Mirken of the Marijuana Policy Project, who said patients at the moment have no choice but to pay "cold, hard cash" for medical marijuana.

The reason that medical marijuana is not covered, both Pisano and Mirken said, is that it is not approved for use by the Food and Drug Administration.

"The main issue here is the question of FDA approval that all drugs need to go through," said Pisano. Lack of FDA approval means no coverage either by private insurers or through any public plan to be drafted in Congress.

So what, then, are the prospects that medical marijuana will get FDA approval? In the short term, at least, they're pretty slim. The fact that marijuana remains a controlled substance presents one hurdle to approval; another, perhaps more significant one is that it isn't a synthesized drug – that is, its component parts are not crafted by drug companies.

As a result, it's hard to say exactly what's in marijuana – and thus hard for the FDA to assess it.

There is an FDA approved drug that contains THC, the primary psychoactive element of the cannabis plant. It's called Marinol, and it was approved way back in 1985. But Marinol lacks many of the not-yet-fully-understood components that come with traditional marijuana, and thus is far-more FDA friendly. (CBSNews.com explored the debate over Marinol in August in this story: "Does the Pot Pill Work?")

And those aren't the only issues complicating matters for medical marijuana: There is also the question of the size of doses. At the moment, marijuana comes in a range of potencies and quantities that would have to be standardized for the drug to meet FDA guidelines.

The FDA's Karen Riley told Hotsheet that the organization does not discuss whether specific drugs are being considered for approval. But since marijuana lacks clear components or standardized doses – and since it is not even clear who might submit it for consideration – it seems extremely unlikely that medical marijuana is going through the process.

For now, then, medical marijuana users shouldn't get their hopes up that they'll soon see the drug partially paid for by their insurance company. Mirken of the Marijuana Policy Project said there has been little agitation to get medical marijuana covered, though he predicted that advocates will eventually take up the cause.

"There hasn't been anything substantial yet," he said. "Right now we're still focused on the legal issues."