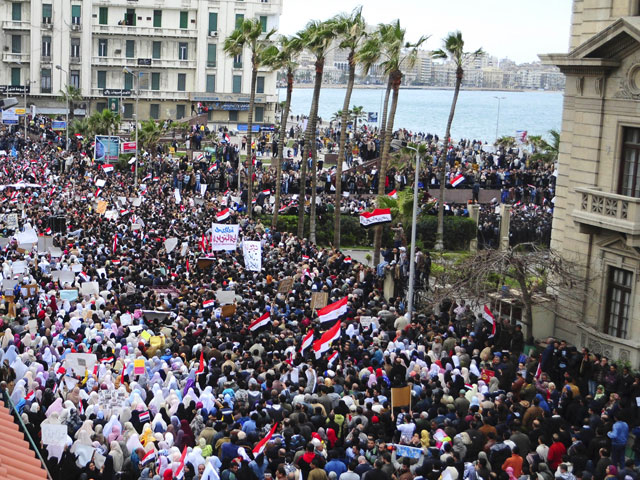 My friend doesn't remember who punched him first, and he lost count of how many times they hit him. He knows one big man held him around the neck as they punched him in the face and kneed him in the groin.

The beating was bad enough, but what he was really afraid of was the black van that they were trying to push him into. He feared that if they got him in the van that they would drive him somewhere remote, and then anything could happen.

As the beating went on a small crowd of people gathered around to watch. He screamed for help, and for mercy, but nobody did anything to stop the self-appointed vigilantes from hitting him.

My friend is 30-years-old, and he was born and lives in Cairo. That night he had gone outside the place where he was staying, and had run into a bunch of vigilantes who decided he was a spy, for no other reason than they didn't recognize him.

He kept shouting for help and as they got him to the van he grabbed onto the door frame so they couldn't push him in.

Finally one person in the crowd took pity on him and went to fetch some policemen, who arrived in time to pull him away from the thugs. But they made no effort to reprimand the men who had administered the beating.

My friend had a lump on his head, some blood in his nose and a sore ribcage and groin area, but fortunately he was otherwise OK--at least physically.

But mentally he bore the same scars as so many thousands of Egyptians who have been beaten, detained and tortured by the security forces that have kept the military in power for the past 58 years.

Egypt's jails and its torturers are infamous across the Middle East, and that is saying something. It was in Egypt's jails that many of al Qaeda's leaders were radicalized, and also where countless members of the Muslim Brotherhood were held and further embittered against the regime.

This security apparatus is widely feared across the country, and relies on a vast network of plain clothes agents, informers and street thugs to keep the population in a constant state of fear.

For the first week of the demonstrations here people began to think that the entire regime could indeed be toppled and that they could shed that fear.

Then came the brutal attacks of Wednesday and Thursday by the pro-Mubarak protesters, coupled with widespread detentions of human rights workers, journalists and activists, and the fear quickly returned.

The protesters in Tahrir Square have not given up, and already they have begun a process of political and social change that few could have imagined a month ago.

Nobody really knows where that process in leading, nor how long it will take. But the people in the square all know what they do not want--and the fear of being beaten by unaccountable thugs to buttress the power of an untouchable elite is right up there on their list of priorities.