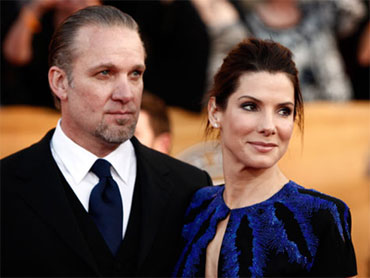 On March 7, Sandra Bullock and Jesse James walked the red carpet arm in arm before Bullock accepted the Best Actress Oscar at the ceremony for her work in "The Blind Side." That next week, she reportedly moved out of the couple's home.

The reason for the move, which was reported by People magazine and happened just days before the infidelity reports surfaced, might be tied to allegations made by tattoo model Michelle "Bombshell" Mcgee, who told In Touch magazine that she had an 11-month affair with James and that he sent her text messages as recently as March 14.

On Thursday, James released a statement publicly apologizing to his wife and children (he has three from his previous marriages) for his "bad judgment," but called the majority of the allegations against him "untrue and unfounded."

Bullock and James married in 2005, and she was a stepmom to James' three children from his two previous marriages. Despite Bullock's reported move out of the family home, there has been no official word on whether or not the couple plans to divorce.

McGee might not have been the only one with her eyes on James. Bullock's husband was "heavily targeted and pursued" by women, according to People.

Another source told the magazine that James had been hanging around "people that [Bullock] may not have necessarily approved of - women," but that his wife "trusted him."

McGee told In Touch that she would have never hooked up with James if she knew he was married.

"He gave me the impression they were separated."