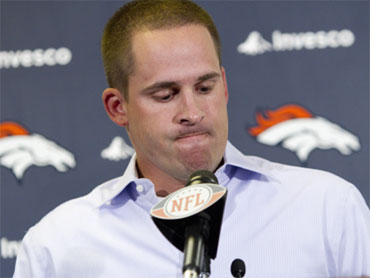 Denver Broncos owner Pat Bowlen has never spared any expense to build a championship team and has paid top dollar for his coaches and players. With the firing of Josh McDaniels Monday after a 3-9 start this season, Bowlen finds himself in a peculiar situation and might not want to pay top dollar for McDaniels' replacement.

Denver is still paying a portion of current Redskins coach Mike Shanahan contract. Shanahan, who led the Broncos to consecutive Super Bowl wins in 1997 and 1998, was fired mid-season in 2008. Bowlen could also be on the hook for $7.5 million remaining on McDaniels' four-year contract.

According to the Denver Post, the team will pay both Shanahan and McDaniels a combined $6.5 million next year.

The Broncos could use Little Spygate as a means to fire McDaniels "for cause" and withhold the remainder of his salaries for 2011 and 2012 based on a violation of his contract. This option has worked in the past, most recently when NFL commissioner Roger Goodell upheld the Oakland Raiders firing of Lane Kiffin "for cause" in 2008.

For now, the Broncos haven't exercised that option and coupled with a possible lockout in 2011, it will affect the Bowlen's decision for a replacement head coach, whether it's Eric Studesville, who was hired as McDaniel's interim replacement, or someone else.

That might mean the Broncos won't go after high-priced coaches, like Bill Cowher, Jon Gruden and current Carolina Panthers head coach John Fox (who is in the final year of his contract and is likely to not return next season).

In a statement, Bowlen thanked McDaniels for his "passion, enthusiasm and hard work" but reiterated that the Broncos are a championship caliber team and fans deserve better.

"In the end, I was not satisfied with the results and the direction this team was headed. The decision to make a change was extremely difficult but one that needed to be made for this organization and our fans," Bowlen said, "Everyone, myself included, is accountable for our disappointing season and is now responsible for restoring the culture of winning that has been established by this franchise. Our entire organization is completely focused on returning to the level of prosperity that our fans expect and deserve from the Denver Broncos."