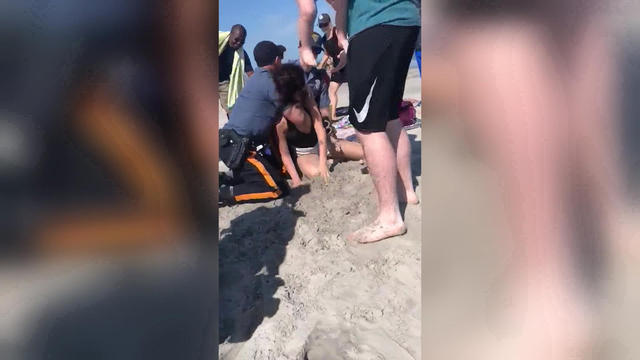 WILDWOOD, N.J. -- Police officers have been reassigned to administrative duty amid an investigation into a video posted online showing an officer punching a woman on a beach in New Jersey. Wildwood police said on their Facebook page that 20-year-old Emily Weinman, of Philadelphia, faces several charges, including two counts of aggravated assault on a police officer, disorderly conduct and resisting arrest.

CBS New York reported video of Saturday's incident shows an officer striking the woman's head twice as she's down on the sand. Voices are heard yelling "stop resisting," though it's unclear who was talking. The video doesn't show what led to the confrontation.

Lexy Hewitt was sitting nearby and recorded the take-down with her phone, the station reported.

"She started screaming initially. It was almost like blood-curdling," Hewitt said. "The officers were on top of her on the ground and that's when I just decided — there's so much going on everywhere — why not, just in case [record the incident]."

Wildwood Police Chief Robert Regalbuto said he finds the video "alarming" but doesn't want to "rush to any judgment" until the investigation is complete.

Wildwood Mayor Ernie Troiano Jr. told The Philadelphia Inquirer that the episode was a "shame," but said police would soon release body camera footage showing officers being insulted and spat upon. Weinman is also charged with spitting at an officer.

"It wasn't just that this officer decided to beat her up," he said. "That wasn't the case."

Troiano declined comment on the use of force, saying he didn't know the whole story, but added: "We don't like to see anyone get hit, period. But then again, when you have someone who's aggressively attacking you or spitting at you. I wasn't there. I don't know."

He also expressed frustration at the amount of underage drinking, saying no one is allowed to drink in public or on the beach in Wildwood unless they are attending an event that has received a permit to allow drinking.

Wildwood police asked anyone who was present and has video of the altercation to come forward to help their internal affairs investigation, in which Cape May County officers will also be assisting.