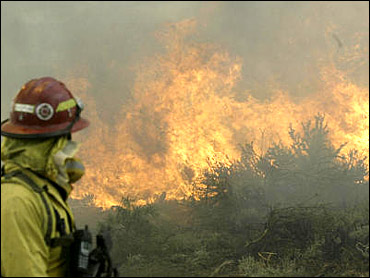 An out-of-control wildfire burned at least six luxury homes to the ground and came within a half mile of the governor's mansion, officials said.

Four firefighters and a television reporter were injured as gusty winds pushed the fire to an estimated 8,500 acres Thursday, stretching about four miles along the state capital's western edge and spreading a plume of smoke overhead.

Ten other homes, businesses and outbuildings have also been destroyed and about 550 more were threatened by the blaze, which began Wednesday.

"It's not very far from us here," Gov. Kenny Guinn said. "The trees are just exploding."

State Forester Pete Anderson said he expected the fire to hit 10,000 acres by day's end. The fire was burning at higher elevations, above inhabited areas, Thursday morning but officials feared that shifting winds could drive it back toward more homes.

"With the heat, the dry materials out there, it's extremely violent. It's scary it's so dry none of these western states have had any water and it s not going to get better," Sierra front firefighter told CBS News.

"Everything was gone but an old antique wagon," she said.

"People say, 'Judy, you have your children and your husband and your dog,' and I say, 'I know that.' But so many memories are gone," she said. "I never dreamed I'd experience something like this."

Authorities were looking for a particular 1978 Dodge truck. Carson City Sheriff Jim Primka told Gonzales the police are looking for 20 people in the age range of 16 to 18.

"It's absolute devastation up there," Sheriff Ken Furlong said.

Furlong said he counted six houses "burned — and I mean burned down to their foundations" and another home that was damaged in the area. The homes had a combined value of millions of dollars.

U.S. 395, Carson's main street, was temporarily closed, and firefighters had to pull away from homes in some areas because of the intensity of the fire, which was fanned by gusts up to 30 mph, said Scott Huntley, spokesman for the Sierra Front Interagency Dispatch Center.

One firefighter broke a leg, another suffered back and neck injuries and two others suffered burns, said Christie Kalkowski, spokeswoman for the Sierra Front in Minden.

One of the burned firefighters was with a crew trapped briefly when the rapidly moving blaze leapfrogged their position and destroyed their fire engine.

Reporter John Tyson of KOLO-TV in Reno suffered minor burns on his hands and face. His vehicle was destroyed, along with an ambulance, as the fire spread in all directions through dry brush, grass and timber.

Other significant wildfires were burning in California and Alaska.

In California, firefighters working in triple-digit heat slowly gained ground against wildfires that have burned more than 21,000 acres of brush and forest and caused hundreds of people to evacuate homes this week.

Changing weather offered some potential for relief as monsoonal flow from the southeast began bringing moisture and thunderstorms to the region, but there was also potential for fire-starting lightning and flash-flooding in old burn areas from last fall's devastating California wildfires.

One of the most difficult fires, well over 7,000 acres in Pine Canyon west of Lake Hughes in Angeles National Forest, was 46 percent contained. Another 80 homes were evacuated Wednesday, a day after 500 were emptied Tuesday.

In Riverside County, a 3,698-acre blaze on the edge of San Bernardino National Forest was 50 percent contained as it burned toward unpopulated terrain. It previously posed a threat to the mountain communities of Idyllwild, Pine Cove and Garner Valley.

In the Sierra, hikers were evacuated and trails were closed in part of Yosemite National Park after a lightning-sparked wildfire grew to 1,300 acres Tuesday. The Meadow fire was one of nine fires burning in the park from lightning strikes two weeks ago, the National Park Service said.

In Alaska, where wildfires were burning on nearly 2.5 million acres, firefighters worked to build a firebreak about a quarter mile from Eagle, population 126.

"About the only way you can fight that kind of fire is with more fire," Plante said.