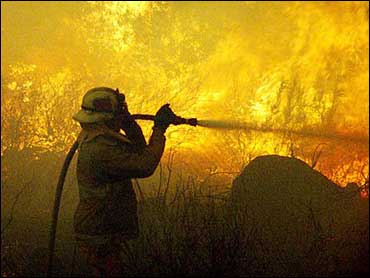 A wind-whipped 16,000-acre wildfire is racing across hills and canyons along the northwestern edge of Los Angeles, threatening homes and forcing hundreds of people to evacuate.

Some 3,000 firefighters aided by aircraft struggled Thursday to protect ridgetop houses along the Los Angeles-Ventura county line, a rugged, brushy landscape west of Los Angeles' San Fernando Valley. Officials said the blaze was 5 percent contained as it burned toward such communities as Thousand Oaks, Simi Valley, Calabasas and Agoura.

"If it wasn't for the wind changing, it would have... gone all the way to the coast," said Joey Escobar, 45, who was among a group of people who gathered to watch the flames near Highway 101. "It's like a fireplace."

David Nenkervis, 64, was away from his home in Santa Susana Pass when it went up in flames. His dog is missing and several vehicles were destroyed.

"When you lose everything it's tough to have plans. Right now, my brain is not working. It's all mush. I can't even think about what I'm going to do tomorrow," said Nenkervis.

Numerous homes were evacuated in nine areas, and the Red Cross says 600 people have signed up to stay at five of its shelters. Poor air quality forced California State University at Northridge to cancel classes for the day.

At least one home and five other structures were lost, but 2,000 buildings had been saved by firefighters, Los Angeles County Supervisor Zev Yaroslavsky said.

"We are guardedly optimistic, if the weather cooperates, if the public cooperates," Yaroslavsky said. "This may end well for all of us, but weather is unpredictable in these parts and everyone needs to be on guard."

"I wasn't going to get stupid about it. There was only one way out, and it was getting real hot," said Jeff Johns, 48.

Actor Shelley Berman of the HBO TV comedy "Curb Your Enthusiasm" evacuated his Bell Canyon home Wednesday evening, taking a few items from the home he has lived in since 1984.

"We were sitting watching television, had finished a nice dinner, everything was fine. Other people were in serious trouble. Then suddenly, we were moving," said Berman, who went with his wife to a friend's house a few miles away in Westlake.

About 45 evacuees gathered at Canoga Park High School in the San Fernando Valley, where the Red Cross had set up cots and provided meals.

"Our house is still OK, but, oh, God, it's not a good feeling," said Phil Goldenberg, 53, who took refuge at the school's gym with his wife and son.

Temperatures have been in the high 90s but are expected to drop over the next few days as humidity rises.

"The winds have died down substantially and that's going to be a big advantage for us in getting control," said Los Angeles County fire Capt. Kurt Schaefer. "With the weather changing, we should start to see the containment numbers go up."

The fire moved west much of the day, menacing Ventura County communities, then sent flanks in the opposite direction as winds shifted from the Pacific. As night fell, long lines of fire marched east toward the wealthy enclave of Hidden Hills and the western fringes of Los Angeles.

The cause of the fire was not immediately known.

Historically, some fires in the region have turned and burned through the Santa Monica Mountains to Malibu and the Pacific Ocean.

The fire spread Thursday to the field labs of Rocketdyne – which ironically had been planning for that day to be an end of an era at the historic company which has been involved in nuclear power and rocket engines from the very beginning of both technologies on up to the space shuttle program today.

Instead of doing a planned final rocket test on the property Thursday, Rocketdyne wound up evacuating 200 workers and calling in Boeing's specialist firefighters as the fire destroyed several buildings the company says were inactive.

A spokesman for Boeing, which has been handling environmental cleanup at the site, says firefighters are not at risk for exposure to rocket fuel, nuclear waste or other hazardous materials because the substances had been placed in storage areas protected from fire.

Another large wildfire in Southern California is now fully contained after burning 1,160 acres in Riverside County. No homes were threatened.

So far this year, according to the National Interagency Fire Center, wildfires have charred 8.16 million acres nationwide, compared with 7.74 million acres by the same time last year.