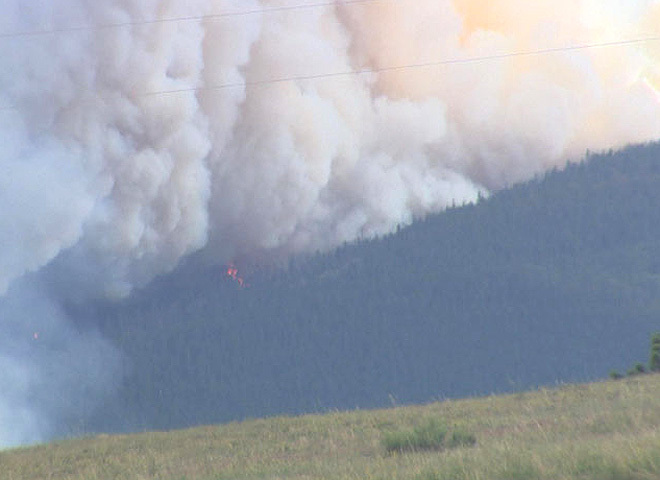 (AP) DENVER - Additional crews were arriving Saturday at a wildfire in northern Colorado that has scorched about 85 square miles and destroyed at least 181 homes, the most in state history.

Fire information officer Brett Haberstick said Saturday that more than 1,500 personnel are working on the Fort Collins-area fire. The lightning-caused blaze, which is believed to have killed a 62-year-old woman whose body was found in her cabin, was 20 percent contained. The fire's incident commander said full containment could be two to four weeks away.

Haberstick said hot and dry conditions were expected to continue, but crews have made progress in containing a 200-acre spot fire that erupted Thursday afternoon north of the Cache La Poudre River, a critical line of defense against northward growth.

"We're hopeful that we will be able to contain it today, but that will be determined by Mother Nature," Haberstick said.

Firefighters have extinguished other incursions north of the river, but the most recent one appeared to be more serious.

National Weather Service meteorologist Kyle Fredin said some rain was expected in the fire zone Saturday evening, but it will not be enough to put the fire out.

"We need a rain that will really last all day," he said. "But it's better than dry wind at this point."

The fire was reported June 9 and has since raced through large swaths of private and U.S. Forest Service land.

Agriculture Secretary Tom Vilsack, who oversees the Forest Service, met with fire managers in Fort Collins on Saturday and said "fighting this fire is going to require us to be aggressive, persistent and also patient.

Vilsack praised Congress for allowing the government to contract additional aircraft — particularly heavy tankers — to fight wildfires across the West. But he called on lawmakers for budget certainty to help plan for future fires.

Vilsack is scheduled to hold a news conference with U.S. Forest Service Chief Tom Tidwell in Albuquerque on Sunday.

Meanwhile in New Mexico, questions were being raised about whether bureaucratic red tape prevented firefighters from saving more homes affected by the Little Bear Fire after federal officials released transcripts of the firefighters' response.

Congressman Steve Pearce said Friday in an interview with KOB-TV that he believed federal officials could have done more after lightning sparked the fire outside the resort town of Ruidoso on June 4. Days later, high winds sent embers more than a mile from the blaze's end, causing the inferno to grow.

But officials released transcripts of the response on the Lincoln National Forest website that suggested firefighters were attacking the blaze as soon as it was a quarter of an acre.

The fire has destroyed 224 homes and burned 59 square miles.