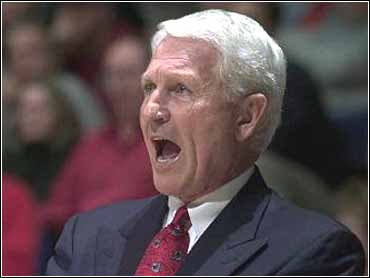 They had been through so much together that in the aftermath of their NCAA championship loss to Duke Monday night, the Arizona Wildcats seemed drained.

The death of coach Lute Olson's wife, Bobbi, on Jan. 1 had hung like a cloud over the Wildcats for three months. Now, with the season over, Olson reflected on his loss and the players spoke about what they learned by how he handled it.

"All of us have things happen to us that we have to be willing accept," Olson said. "I don't know how many people that I've heard from that have lost life partners. And they said ... those memories are going to be there all your life, and the pain will start diminishing eventually, not totally, but ...

"So it's a fact of life. So it's there. And like I've said, thank goodness for family and great friends."

Center Loren Woods said he admired his coach's strength in the face of personal tragedy.

"That's not about coach Olson. It's just about growing up. All of us seniors came to college as boys and we're leaving as men."

Richard Jefferson said he had learned from Olson how important family is in time of crisis.

"He went through some very tough times this year, and his family was really there for him. You see his family and how close-knit they are," Jefferson said. "That's hw you want to raise your family.

"That's something when you see, you're a 19-, 20-year-old boy going into the world, you need an example like that. This is how your family needs to be. This is how you raise your kids.