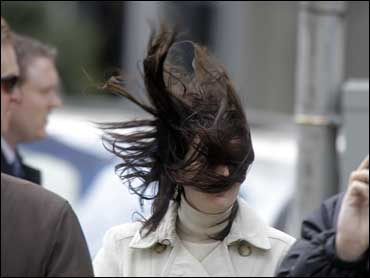 Wild winds with gusts topping 60 mph blew from the Great Lakes to the East Coast on Thursday, knocking out power to hundreds of thousands of customers, disrupting travel and killing at least five people.

"I got more sand in my eyes than a beach, and I almost got blown over backwards," said electrician Michael Lazzaro, who ducked into a bar on his way home from work in New York.

Utilities such as Jersey Central Power & Light in New Jersey reported downed power lines from wind-snapped trees. About 250,000 customers remained without power Thursday in Pennsylvania, and 140,000 more in Ohio. There were also about 109,000 outages in West Virginia, more than 35,000 in New Jersey and 14,900 in Michigan.

"This is one of the largest power outages we've seen in many years," said Jimmy Gianato, West Virginia's director of Homeland Security and Emergency Management. At one point, 220,000 customers were without power. At least six state parks also had no electricity.

Utilities in Ohio and West Virginia said electricity wouldn't be restored to some residents until the weekend or later.

In New Jersey, a 61-year-old motorist was killed early Thursday in Union County when a tree snapped, crashing through her car's windshield and impaling the woman. A woman in Newark died of massive head injuries after a tree branch fell and struck her Thursday afternoon. Another woman attending her brother's wake in West Virginia was struck and killed by debris when the church's gymnasium collapsed Wednesday night.

A 35-year-old truck driver also died Wednesday night near Columbus, Ohio, when wind knocked a semitrailer into his truck. Police said three other semitrailers were knocked over by wind Wednesday night, injuring one of the drivers.

Wind also was believed to be a factor in the death of a 59-year-old New York City construction worker who was killed when a wall collapsed, officials said.

A downed power line forced the closure of Interstate 90 west of Erie, Pa., for three hours on Thursday morning. The wind also disrupted the morning rail commute in the New York City area, and four people were hurt, apparently by flying glass, when the wind blew a crossing gate into a Long Island Rail Road train.

The National Weather Service reported a wind gust of 92 mph in Allegheny County in Pennsylvania, but said most gusts in the region were no greater than 60 mph.

A 35-year-old utility worker from Minnesota fell 30 feet to his death Thursday while helping repair crews restore power in Kentucky.

Some 25 to 30 Kentucky National Guard members were assigned to help clean up debris, a Guard spokesman said. Most of the new outages were in the southeastern part of the state, while the ice storm mostly affected western Kentucky.

About 200 people in Allegheny County, Pa., were evacuated from homes and an assisted-living center late Wednesday because of a storm-related gas leak. They were allowed to return early Thursday.

The strong wind blew a roof off a building in West York, Pa., and several roads were shut down while the debris was cleaned up.

Schools were closed outright in some areas, including Buffalo, N.Y., and at least two dozen counties in West Virginia, where Gov. Joe Manchin authorized National Guard troops to help clean up after severe thunderstorms struck the state. Other schools opened late.

Earlier, gusts topping 70 mph were reported Wednesday night in Indiana and Ohio as the system moved through. Gusts as high as 45 mph were still being reported by Thursday morning.

To the east, wind gusts of 48 mph were reported in New York City, and average flight delays topped 3 hours Thursday at LaGuardia Airport and 3½ hours at Newark Liberty International Airport in New Jersey.

A warm spell that preceded the cold front led to flooding in some areas as snow melted and ice jams formed on creeks.

In Michigan, wastewater from treatment plants in Bay City, Essexville and Saginaw overflowed into the Saginaw River Thursday morning, The Saginaw News reported. Flood warnings were in effect along the Grand River and for areas across the Lower Peninsula.

Some streets were underwater in a flood-prone area of Findlay, Ohio. Police ordered bystanders off a bridge in Buffalo, N.Y., and closed the span Wednesday after a huge ice jam built up on a creek. It eventually broke up. An ice jam also backed up the Black River in Michigan's St. Clair County.

A river flood advisory for Pittsburgh was posted through Saturday.