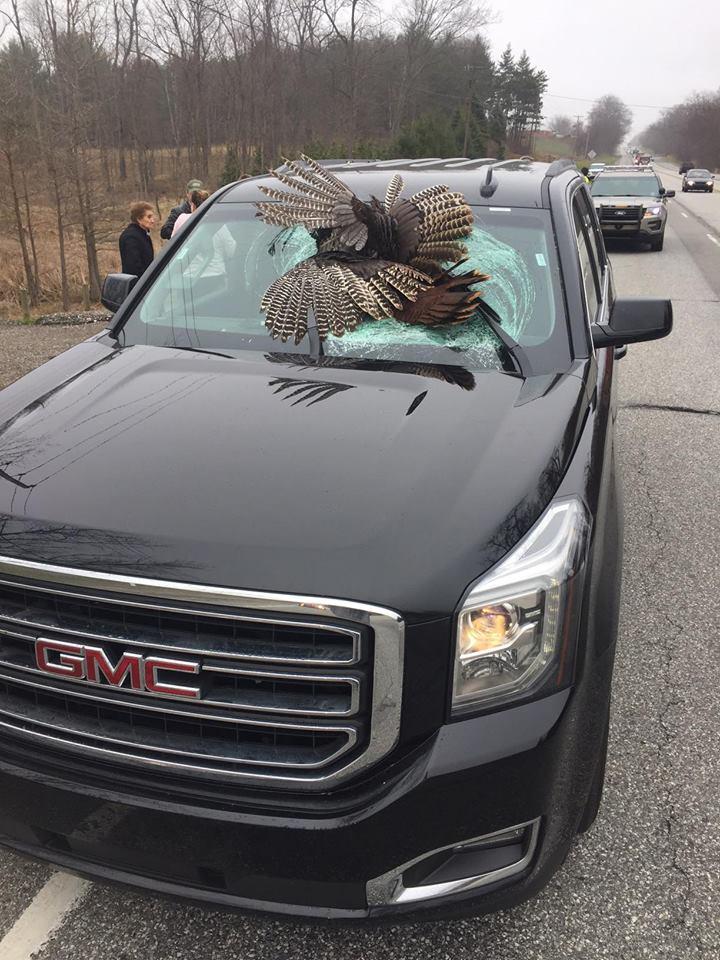 SOUTH BEND, Ind. -- A 30-pound wild turkey smashed through the windshield of one family’s SUV in northwest Indiana Tuesday -- a collision so dramatic the family says they will be eating ham on Thanksgiving from now on.

The Tarabocchia family from Emerson, N.J. were visiting the University of Notre Dame and were driving on U.S. 20 in La Porte County, Ind. when a wild turkey flew into their path, according to the La Porte County Sheriff’s Office.

The family suffered minor injuries. The turkey was killed on impact.

“We’ve had incidents of turkeys striking vehicles in the past but I don’t think anything nearly as this dramatic,” La Porte County Sheriff’s Capt. Mike Kellems said, CBS Chicago reports.

“Very, very fortunate. They refused medical treatment. In fact, they were very concerned about catching their flight,” Kellems told CBS Chicago. “I have to tell you, they had pretty good humor about it, and when I talked to Mr. Tarabocchia, I asked him ‘What are your plans for Thanksgiving?’ and he said their family is going to be eating ham from now on.”

Bob Smigielski, 61, of Chicago, witnessed the collision, WSBT reports. He said thought the bird would bounce off and was shocked at what he saw after turning around to check on the victims.

‘’I never thought he would be stuck,’’ Smigielski said.

Smigielski then received permission to take the bird home where he plans to clean and cook it himself.

Etchison said motor vehicles collide into wild turkeys occasionally, but how this one ended was quite unusual.

‘’The wild turkeys around here, they’re usually a lot smaller. They’re not in the 25-pound variety. This is the largest I’ve seen actually getting hit by a vehicle. This is pretty incredible,’’ said Etchison.

“Mating season for wild turkeys means that they are often on the move and can be as hazardous as deer,” the La Porte County Sheriff’s Office wrote on Facebook. There have been other similar incidents elsewhere, CBS New York reports.

On Monday, a wild turkey smashed through a library window in Monroeville, Penn. In New Hampshire, a 19-pound Tom smashed smashed into the cab of an 18-wheeler last week.