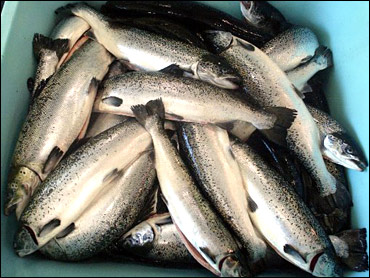 Farm-raised salmon contain significantly more dioxins and other potentially cancer-causing pollutants than do salmon caught in the wild, says a major study that tested contaminants in fish bought around the world.

Salmon farmed in Northern Europe had the most contaminants, followed by North America and Chile, according to the study released Thursday. It blames the feed used on fish farms for concentrating the ocean pollutants.

Eating more than a meal of farm-raised salmon per month, depending on its country of origin, could slightly increase the risk of getting cancer later in life, researchers conclude. They urge consumers to buy wild salmon and recommend that farmers change fish feed.

But the Food and Drug Administration said the levels of pollutants found in salmon are too low for serious concern. The agency urged Americans not to let the new research, reported Thursday in the journal Science, frighten them into a diet change.

The debate is sure to confuse consumers, who long have been told to eat fish at least twice a week because it helps prevent heart disease. Indeed, salmon is usually listed as a top choice because it is particularly high in heart-healthy omega-3 fatty acids and low in a completely different seafood contaminant, mercury.

Moreover, most farm-raised salmon sold in the United States comes from Chile - and the pollutant level in it was not too much higher than that found in some wild-caught salmon.

The study "will likely over-alarm people in this country," said Eric Rimm of the Harvard School of Public Health, a specialist on nutrition and chronic disease. "To alarm people away from fish because of some potential, at this point undocumented, risk of long-term cancer - that does worry me."

The study tested salmon raw, with the skin on. Removing the skin and grilling it removes a significant amount of PCBs, dioxins and other pollutants stored in fish fat, the FDA noted.

The government does not have one set level of dioxins and PCBs that is considered safe in foods.

"We are certainly not telling people not to eat fish. ... We're telling them to eat less farmed salmon," said David Carpenter of the University at Albany, N.Y., who tested 700 salmon from around the world.

In setting his consumption advice, Carpenter cited Environmental Protection Agency guidelines that are far stricter than the FDA's legal limits.

Farmed salmon eat lots of fish oil and meal made from just a few species of ocean fish, which concentrates the contaminants they are exposed to, while wild salmon eat a greater variety, Carpenter explained.

The salmon farming industry points out that all the pollutant levels are well within the FDA's legal limits and says other foods eaten far more often, such as beef, are greater sources of exposure.

Raising salmon in floating pens is an industry that began just two decades ago but has helped the fish's popularity to soar, turning it from a seasonal to a year-round commodity. More than half the world's salmon now is farmed. Farm-raised salmon sells for about $4 or $5 a pound compared with $15 for wild salmon, said Alex Trent of the trade group Salmon of the Americas.

"These fish don't have to be contaminated," said Jane Houlihan of the Environmental Working Group, which wants salmon farms to switch the feed they use.

Trent said many farmers in the United States, Canada and Chile are slowly replacing some of the fish oil in salmon feed with soybean and canola oil to address the pollutants.

"PCB levels are coming down 10 to 20 percent a year. Every year we take more steps," he said.

Farm-raised salmon contained significantly higher concentrations of 13 pollutants, including dioxins, released when industrial waste is burned, and PCBs, once widely used as insulating material, according to the study.

Animals absorb those pollutants through the environment, storing them in fat that people then eat. High levels are believed to increase the risk of certain cancers and, in pregnant or breast-feeding women, harm the developing brains of fetuses and infants.

One in two Americans will die of cardiovascular disease, a far bigger risk than the cancer concern, said nutritionist Alice Lichtenstein of the Agriculture Department's Human Nutrition Research Center at Tufts University.

Still, "this was a beautiful study" that does raise a concern that needs more attention, she said. "The bottom-line message is to continue to eat fish but consume a variety of different types."

As for the geographic difference in contaminant levels, ocean pollution follows a similar pattern. Europe was industrialized before North and then South America, and presumably each region uses salmon feed made of local ocean fish.

The study was funded by the Pew Charitable Trusts.