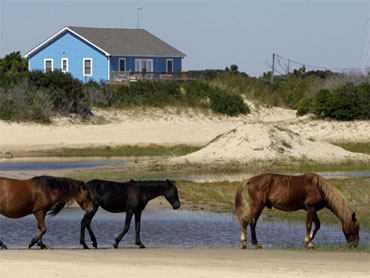 On a stretch of barrier island without paved roads, some of the last wild horses in the eastern United States are seeing their world get smaller each year.

A boom in vacation homes in the last 25 years in this remote place has seen the descendants of colonial Spanish mustangs confined to a 7,500-acre sanctuary on the northern tip of North Carolina's Outer Banks. And now the herd itself may shrink along with its habitat.

A plan backed by the federal government would see the herd reduced from about 115 horses today to no more than 60 in a bid to stop the animals, designated North Carolina's state horse this year, from competing with federally protected birds for increasingly hard-to-come-by resources.

The Fish and Wildlife Service says the plan will reduce harmful behavior by a species it considers a nuisance. But residents who rely on the horses to bring in tourist dollars or who simply cherish the mustangs as a symbol of the country's spirit worry it could bring about the collapse of the herd through hereditary diseases and other complications of a shallow gene pool.

"The American wild horse is disappearing from our country," said Karen McCalpin, executive director of the Corolla Wild Horse Fund, a nonprofit group that manages the herd. "To me, they're as much a symbol of freedom as the bald eagle."

Wild mustangs, which are found in their greatest numbers in Western states, at one time could also be found in large herds throughout the southeast. Today, they're confined to a few isolated spots in Maryland, Virginia, North Carolina and Georgia.

Thousands of mustangs once roamed the Outer Banks, descendants of horses brought during an ill-fated Spanish colonial mission in the 1520s. But Highway 12 has been steadily moving north through the barrier islands, reaching Corolla in the 1980s and bringing rapid development with it.

Huge, brightly painted vacation homes now line the road, and even pop up behind the dunes on Corolla's beach, accessible only by vehicles with four-wheel drive. Once the paved road ends, there's no development except vacation homes, some as big as mansions.

It's a remote area, where responses to 911 calls can take up to 45 minutes. There are more than 1,300 homes in this part of the island, which has a year-round population of fewer than 150.

The horses around Corolla are in a unique situation. Unlike their counterparts farther south in Shackleford Banks, the mustangs don't have any kind of federal protection.

In fact, on its website, the Currituck National Wildlife Refuge describes the animals as something of a pest: "The Fish and Wildlife Service considers the horses to be nonnative, feral animals and not a natural component of the barrier island ecosystem," it reads. "These animals compete with native wildlife species for food and fresh water."

The management plan calls for the size of the herd to be kept at 60, meaning horses in excess of that number would have to be captured and put up for adoption to new homes off the island, while remaining mares would be treated with contraceptive medication to stop them from becoming pregnant.

That could leave the horses vulnerable to hereditary diseases and other problems associated with a shallow gene pool, according to Gus Cothran, a professor of veterinary integrative biosciences at Texas A&M University who has studied the animals.

Already, some of the horses show signs of inbreeding in their small stature, looking more like ponies than the full-grown mustangs they are.

"Within a generation, it would almost certainly reduce the genetic diversity even more," he said. "They would be at a pretty high risk to be unable to survive another severe bottleneck."

That would be disastrous not just for horse lovers, but for the local economy, which has capitalized on the animals as a tourist attraction.

Six companies give guided tours of the horses' habitat to thousands of tourists every year, bringing in hundreds of thousands of dollars.

"There's the lighthouse and there's the horses, and aside from that there's no other kind of economic activity," said Kevin Jackson with Bob's Off-Road Wild Horse Adventure Tours.

The wild horse fund has put its hopes in a bill introduced in Congress by Rep. Walter Jones, R-N.C. The bill would set a target population of between 120 and 130 horses, and allow the introduction of mares from the herd at Shackleford Banks, on the other end of the Outer Banks, to enhance the genetic diversity of the Corolla horses.

In the 1990s, Jones authored legislation that brought similar federal protection to the wild horses at Shackleford Banks, located in the Cape Lookout National Seashore.

The Fish and Wildlife Service has commissioned a two-year study, begun in June, to measure the effects of nonnative species like the horses on the region.

"We don't really know what's going on over there, and we'd like to get the science together so we can better manage our resources there," said Mike Hoff, manager of the Currituck refuge.

But the federal government agrees with the horses' advocates that booming development is a challenge to all wildlife, native and nonnative alike.

"The county says there are 3,195 developable lots up there," Hoff said. "At that point, what habitat is left?"