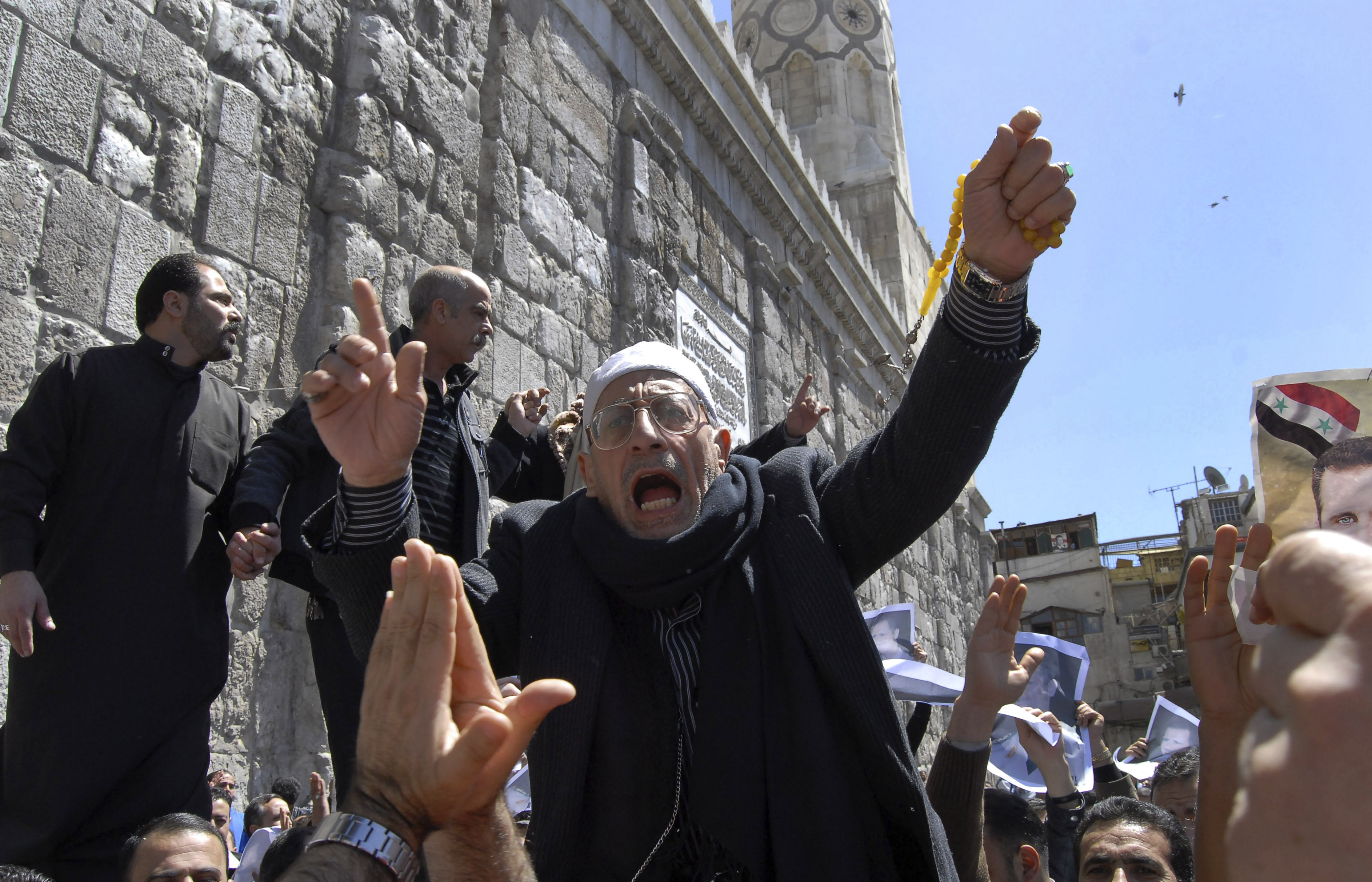 The State Department has secretly financed Syrian political opposition groups and related projects, including a satellite TV channel that beams anti-government programming into the country, according to previously undisclosed diplomatic cables.

The London-based satellite channel, Barada TV, began broadcasting in April 2009 but has ramped up operations to cover the mass protests in Syria as part of a long-standing campaign to overthrow the country's autocratic leader, Bashar al-Assad. Human rights groups say scores of people have been killed by Assad's security forces since the demonstrations began March 18; Syria has blamed the violence on "armed gangs."

Barada TV is closely affiliated with the Movement for Justice and Development, a London-based network of Syrian exiles. Classified U.S. diplomatic cables show that the State Department has funneled as much as $6 million to the group since 2006 to operate the satellite channel and finance other activities inside Syria. The channel is named after the Barada River, which courses through the heart of Damascus, the Syrian capital.

The U.S. money for Syrian opposition figures began flowing under President George W. Bush after he effectively froze political ties with Damascus in 2005. The financial backing has continued under President Obama, even as his administration sought to rebuild relations with Assad. In January, the White House posted an ambassador to Damascus for the first time in six years.

The cables, provided by the anti-secrecy Web site WikiLeaks, show that U.S. Embassy officials in Damascus became worried in 2009 when they learned that Syrian intelligence agents were raising questions about U.S. programs. Some embassy officials suggested that the State Department reconsider its involvement, arguing that it could put the Obama administration's rapprochement with Damascus at risk.

Syrian authorities "would undoubtedly view any U.S. funds going to illegal political groups as tantamount to supporting regime change," read an April 2009 cable signed by the top-ranking U.S. diplomat in Damascus at the time. "A reassessment of current U.S.-sponsored programming that supports anti-[government] factions, both inside and outside Syria, may prove productive," the cable said.

It is unclear whether the State Department is still funding Syrian opposition groups, but the cables indicate money was set aside at least through September 2010. While some of that money has also supported programs and dissidents inside Syria, The Washington Post is withholding certain names and program details at the request of the State Department, which said disclosure could endanger the recipients' personal safety.

Syria, a police state, has been ruled by Assad since 2000, when he took power after his father's death. Although the White House has condemned the killing of protesters in Syria, it has not explicitly called for his ouster.

The State Department declined to comment on the authenticity of the cables or answer questions about its funding of Barada TV.

Tamara Wittes, a deputy assistant secretary of state who oversees the democracy and human rights portfolio in the Bureau of Near Eastern Affairs, said the State Department does not endorse political parties or movements.

"We back a set of principles," she said. "There are a lot of organizations in Syria and other countries that are seeking changes from their government. That's an agenda that we believe in and we're going to support."

The State Department often funds programs around the world that promote democratic ideals and human rights, but it usually draws the line at giving money to political opposition groups.

In February 2006, when relations with Damascus were at a nadir, the Bush administration announced that it would award $5 million in grants to "accelerate the work of reformers in Syria."

But no dissidents inside Syria were willing to take the money, for fear it would lead to their arrest or execution for treason, according to a 2006 cable from the U.S. Embassy, which reported that "no bona fide opposition member will be courageous enough to accept funding."

Around the same time, Syrian exiles in Europe founded the Movement for Justice and Development. The group, which is banned in Syria, openly advocates for Assad's removal. U.S. cables describe its leaders as "liberal, moderate Islamists" who are former members of the Muslim Brotherhood.

It is unclear when the group began to receive U.S. funds, but cables show U.S. officials in 2007 raised the idea of helping to start an anti-Assad satellite channel.

People involved with the group and with Barada TV, however, would not acknowledge taking money from the U.S. government.

"I'm not aware of anything like that," Malik al-Abdeh, Barada TV's news director, said in a brief telephone interview from London.

Abdeh said the channel receives money from "independent Syrian businessmen" whom he declined to name. He also said there was no connection between Barada TV and the Movement for Justice and Development, although he confirmed that he serves on the political group's board. The board is chaired by his brother, Anas.

"If your purpose is to smear Barada TV, I don't want to continue this conversation," Malik al-Abdeh said. "That's all I'm going to give you."

Other dissidents said that Barada TV has a growing audience in Syria but that its viewer share is tiny compared with other independent satellite news channels such as al-Jazeera and BBC Arabic. Although Barada TV broadcasts 24 hours a day, many of its programs are reruns. Some of the mainstay shows are "Towards Change," a panel discussion about current events, and "First Step," a program produced by a Syrian dissident group based in the United States.

Ausama Monajed, another Syrian exile in London, said he used to work as a producer for Barada TV and as media relations director for the Movement for Justice and Development but has not been "active" in either job for about a year. He said he now devotes all his energy to the Syrian revolutionary movement, distributing videos and protest updates to journalists.

He said he "could not confirm" any U.S. government support for the satellite channel, because he was not involved with its finances. "I didn't receive a penny myself," he said.

Several U.S. diplomatic cables from the embassy in Damascus reveal that the Syrian exiles received money from a State Department program called the Middle East Partnership Initiative. According to the cables, the State Department funneled money to the exile group via the Democracy Council, a Los Angeles-based nonprofit. According to its Web site, the council sponsors projects in the Middle East, Asia and Latin America to promote the "fundamental elements of stable societies."

The council's founder and president, James Prince, is a former congressional staff member and investment adviser for PricewaterhouseCoopers. Reached by telephone, Prince acknowledged that the council administers a grant from the Middle East Partnership Initiative but said that it was not "Syria-specific."

Prince said he was "familiar with" Barada TV and the Syrian exile group in London, but he declined to comment further, saying he did not have approval from his board of directors. "We don't really talk about anything like that," he said.

The April 2009 cable from the U.S. Embassy in Damascus states that the Democracy Council received $6.3 million from the State Department to run a Syria-related program called the "Civil Society Strengthening Initiative." That program is described as "a discrete collaborative effort between the Democracy Council and local partners" to produce, among other things, "various broadcast concepts." Other cables make clear that one of those concepts was Barada TV.

Edgar Vasquez, a State Department spokesman, said the Middle East Partnership Initiative has allocated $7.5 million for Syrian programs since 2005. A cable from the embassy in Damascus, however, pegged a much higher total -- about $12 million -- between 2005 and 2010.

The cables report persistent fears among U.S. diplomats that Syrian state security agents had uncovered the money trail from Washington.

A September 2009 cable reported that Syrian agents had interrogated a number of people about "MEPI operations in particular," a reference to the Middle East Partnership Initiative.

"It is unclear to what extent [Syrian] intelligence services understand how USG money enters Syria and through which proxy organizations," the cable stated, referring to funding from the U.S. government. "What is clear, however, is that security agents are increasingly focused on this issue."

U.S. diplomats also warned that Syrian agents may have "penetrated" the Movement for Justice and Development by intercepting its communications.

A June 2009 cable listed the concerns under the heading "MJD: A Leaky Boat?" It reported that the group was "seeking to expand its base in Syria" but had been "initially lax in its security, often speaking about highly sensitive material on open lines."

The cable cited evidence that the Syrian intelligence service was aware of the connection between the London exile group and the Democracy Council in Los Angeles. As a result, embassy officials fretted that the entire Syria assistance program had been compromised.

"Reporting in other channels suggest the Syrian [Mukhabarat] may already have penetrated the MJD and is using the MJD contacts to track U.S. democracy programming," the cable stated. "If the [Syrian government] does know, but has chosen not to intervene openly, it raises the possibility that the [government] may be mounting a campaign to entrap democracy activists."