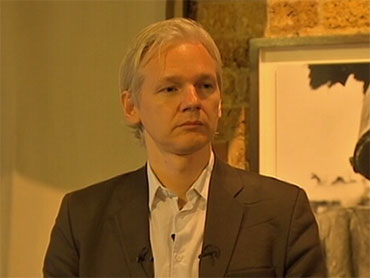 WikiLeaks founder Julian Assange said Monday he believes there is evidence of war crimes in the thousands of pages of leaked U.S. military documents relating to the war in Afghanistan.

The remarks came after WikiLeaks, a whistle-blowing group, posted some 91,000 classified U.S. military records over the past six years about the war online, including unreported incidents of Afghan civilian killings and covert operations against Taliban figures.

The White House, Britain and Pakistan have all condemned the release of the documents, one of the largest unauthorized disclosures in military history.

Assange told reporters in London that "it is up to a court to decide really if something in the end is a crime. That said ... there does appear to be evidence of war crimes in this material."

Assange compared the impact of the released material to the opening of the East German secret police archives. "This is the equivalent of opening the Stasi archives," he said.

The documents cover much of what the public already knows about the troubled nine-year conflict: U.S. special operations forces have targeted militants without trial, Afghans have been killed by accident, and U.S. officials have been infuriated by alleged Pakistani intelligence cooperation with the very insurgent groups bent on killing Americans.

WikiLeaks posted the documents Sunday. The New York Times, London's Guardian newspaper and the German weekly Der Spiegel were given early access to the records.

White House national security adviser Gen. Jim Jones said the release "put the lives of Americans and our partners at risk." In a statement, he then took pains to point out that the documents describe a period from January 2004 to December 2009, mostly during the administration of President George W. Bush. And, Jones added, before President Obama announced a new strategy.

Pakistan's Ambassador Husain Haqqani agreed, saying the documents "do not reflect the current on-ground realities," in which his country and Washington are "jointly endeavoring to defeat al Qaeda and its Taliban allies."

The U.S. and Pakistan assigned teams of analysts to read the records online to assess whether sources or locations were at risk.

Pakistan's powerful spy agency, Inter-Services Intelligence, said Monday that the accusations it had close connections to Taliban militants were malicious and unsubstantiated.

A senior ISI official said they were from unverified raw intelligence reports and were meant to impugn the reputation of the spy agency. He spoke on condition of anonymity in line with the agency's policy.

Hamid Gul, a former head of the ISI who is mentioned many times in the documents, also denied allegations that he'd worked with the insurgents.

Assange said his group also had many more documents on other subjects, including files on countries from across the globe.

"We have built up an enormous backlog of whistleblower disclosures," he said. "We have in this backlog ... files that concern every country in the world with a population of over 1 million."

He refused to go into detail, but said the information included "thousands of databases and files about all sorts of countries."

Assange said that he believed more material would flood amid the blaze of publicity.

"It is our experience that courage is contagious," he said. "Sources are encouraged by the opportunities that they see before them."