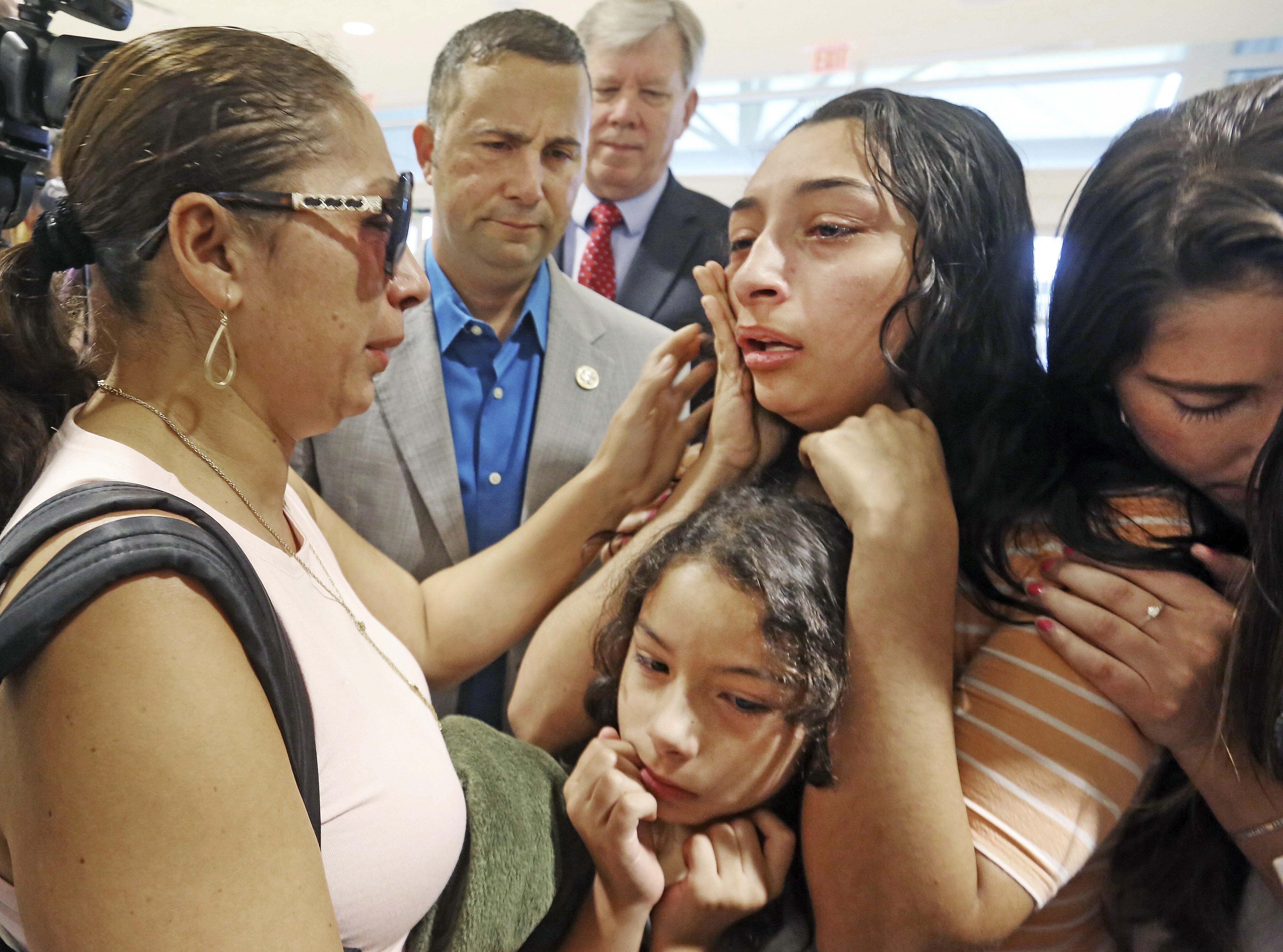 ORLANDO, Fla.  — The 16-year-old American daughter of a former Marine held back tears as long as she could Friday before her family was split in two.

Her mother, Alejandra Juarez, was finally leaving for Mexico, rather than be sent off in handcuffs, after exhausting all her options to stop her deportation.

"My mom is a good person. She's not a criminal," Pamela said, cursing at the immigration agency before her mother checked in for her flight from Orlando International Airport.

Alejandra and Temo Juarez, a naturalized citizen who runs a roofing business, quietly raised Pamela and their 8-year-old daughter Estela in the central Florida town of Davenport until a 2013 traffic stop exposed her legal status.

Afterward, she regularly checked in with U.S. Immigration and Customs officials, which typically went after higher-priority targets like people with criminal records. Temo didn't figure his vote for President Donald Trump would affect them personally. That was before the enforcement of Mr. Trump's "zero tolerance" policy toward illegal immigrants.

Now, the Juarez family will be divided in two: Estela will join her mother in Mexico after she gets settled, while Temo cares for Pamela and pays the bills.

Alejandra petitioned to become a citizen in 2001, but was rejected because she was accused of making a false statement at the border when she sought asylum in 1998, said her attorney, Richard Maney. Asked about her citizenship, she had told authorities she had been a student in Memphis, Tennessee for a short time, and border officials apparently thought she was falsely claiming to be an American citizen, the attorney said.

U.S. Rep. Darren Soto, D-Florida, who couldn't get the votes in Congress for legislation to allow Juarez to remain, called her situation disgraceful. "We're not going to give up," he told her with a hug at the airport.

"It's an absolute disgrace by the Trump administration to be deporting a patriotic spouse," Soto said. "Her husband, Temo, served in the Marines ... while she was at home on the home-front, raising two young women. What justice does this serve?"

Alejandra ultimately decided to "self-deport" to Mexico, rather than turn herself in to be detained and then deported. After 20 years in the United States, she no longer has family or friends in the country, so she chose Merida, a city in the Yucatan where a small community of deported military spouses might help her.

Emotionally spent, she wiped her own tears behind sunglasses and stroked Pamela's hair while gripping Estela, who stood by her side. Temo said he preferred not to talk before they were all escorted through security for their final goodbyes.

A reporter asked what she would say to the president. Alejandra said she'd ask how Mr. Trump could let this happen, since he "always says he loves the military and he's doing everything for the military."

"My husband fought for this country three times. The administration, yourself, you think you are punishing me. You're not just punishing me," she said, referring to her family. "I hope this make him happy. Perhaps we will forgive him."

Temo Juarez is a former Marine infantryman who served in Albania, the Democratic Republic of Congo, and South America, and later joined the Army National Guard in Orlando, according to the Military Times.