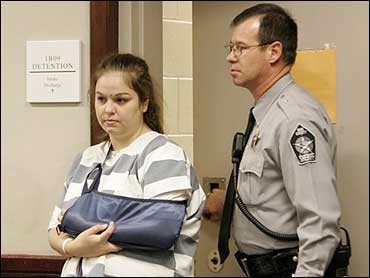 A North Carolina reservist was killed while he was home from the Middle East for the holidays. As Amanda Lamb from CBS affiliate WRAL reports, his wife and her alleged teenage lover have been charged in the killing.

Monique Berkley, 26, made her first appearance in a Wake County courtroom as a murder suspect Tuesday, just days after calling 911 from a Raleigh park to report the shooting.

Paul Berkley, 46, was shot to death early Sunday. Monique's alleged lover, Andrew Canty, and his friend, Latwon Johnson, both 18, are also charged. Prosecutors say it appears they planned the shooting together.

But that's not what she told the 911 operator, only saying she heard two male voices.

Paul leaves behind a son, Zeke, and a daughter, Becky.

"I feel for Zeke. I feel really bad for him. It doesn't make any sense," says Samantha Narron, a friend.

The victim's daughter, Becky, talks on her blog about how it feels to "lose dad, Monique, Andrew and Latwon."

Kascha Peavy, a friend of Andrew Canty, believes Monique Berkley may have led him astray.

Paul Berkley loved computers and while he was stationed in the Middle East he kept in touch with friends all over the world, especially in California where he lived most of his life prior to coming to North Carolina.

Now those friends say Berkley sensed something was going on at his Clayton home while he was away. He just didn't know what it was.