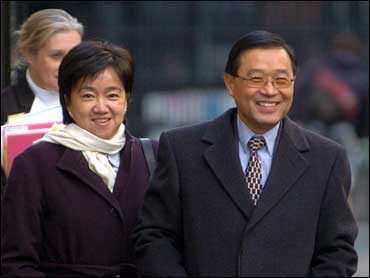 Think of it as a giant tip.

A wealthy widow repaid the kindness shown to her by a family that runs a Chinese restaurant she frequented by leaving them 10 million pounds ($21 million) in her will - a gesture a High Court judge ruled perfectly legal Friday as he dismissed the objections of relatives.

Golda Bechal's 1994's will said she wanted Kim Sing Man and his wife, Bee Lian, the owners of a Chinese restaurant northeast of London, to inherit her money.

Bechal's five nephews and nieces asked the court to declare the will invalid, claiming their aunt was suffering from dementia. They had asked the judge to give the inheritance to them.

But Judge Donald Rattee accepted the restaurateurs' evidence that Bechal, sad and lonely after the death of her husband and the death of her son Peter at the age of 28, became like a family member to them.

They went on foreign holidays together and regularly got together at their restaurant and at her flat in Mayfair, central London.

"It was not irrational to leave the bulk of her estate to Mrs. Man, the daughter she would dearly wished to have had, and her husband," Rattee said.