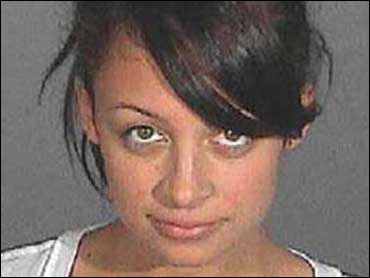 On Wednesday, two days after news broke about celebutante Nicole Richie's arrest for driving under the influence, a new story indicates that a very natural, very feminine, reason may lie behind Richie's unfortunate arrest: her period.

According to Us Weekly's Web site, one of Richie's friends says the reason "The Simple Life" star is taking Vicodin - a combination of hydrocodone and Tylenol - is menstrual cramps.

Manhattan gynecologist Dr. Adele Cavalli told The Showbuzz that the drug is prescribed in very extreme cases of menstrual pain.

"I gave it to a patient yesterday," she said.

But that still doesn't explain the marijuana Richie told police she smoked.

Many have had trouble believing Richie, who according to her police report weighs 85 pounds, could even have a period, considering how low her weight has fallen.

Cavalli said that because she is not familiar with the specifics in Richie's case, she didn't know for sure if she got her period.

In the past, Richie has said she is too thin and is trying to gain weight - she has remained adamant that she does not suffer from an eating disorder.

A friend told Us Weekly that Richie is proud of the ten pounds she's gained in the last two months and actually weighs 95 pounds.

Richie's rep had no comment for Us Weekly on the matter.

New reports have surfaced that Richie may face jail time because of previous arrests. Under California law, those convicted of their second DUI must spend a mandatory five days in jail and have their licenses suspended for one year. In addition, Richie would have to attend an alcohol education program, even though she may not have been using other substances.

In 2002, Richie was given three years' probation after she plead no contest to a DUI charge. Six month later, Richie was arrested for driving with a suspended license and heroin possession. She completed rehab for her heroin addiction in 2003.