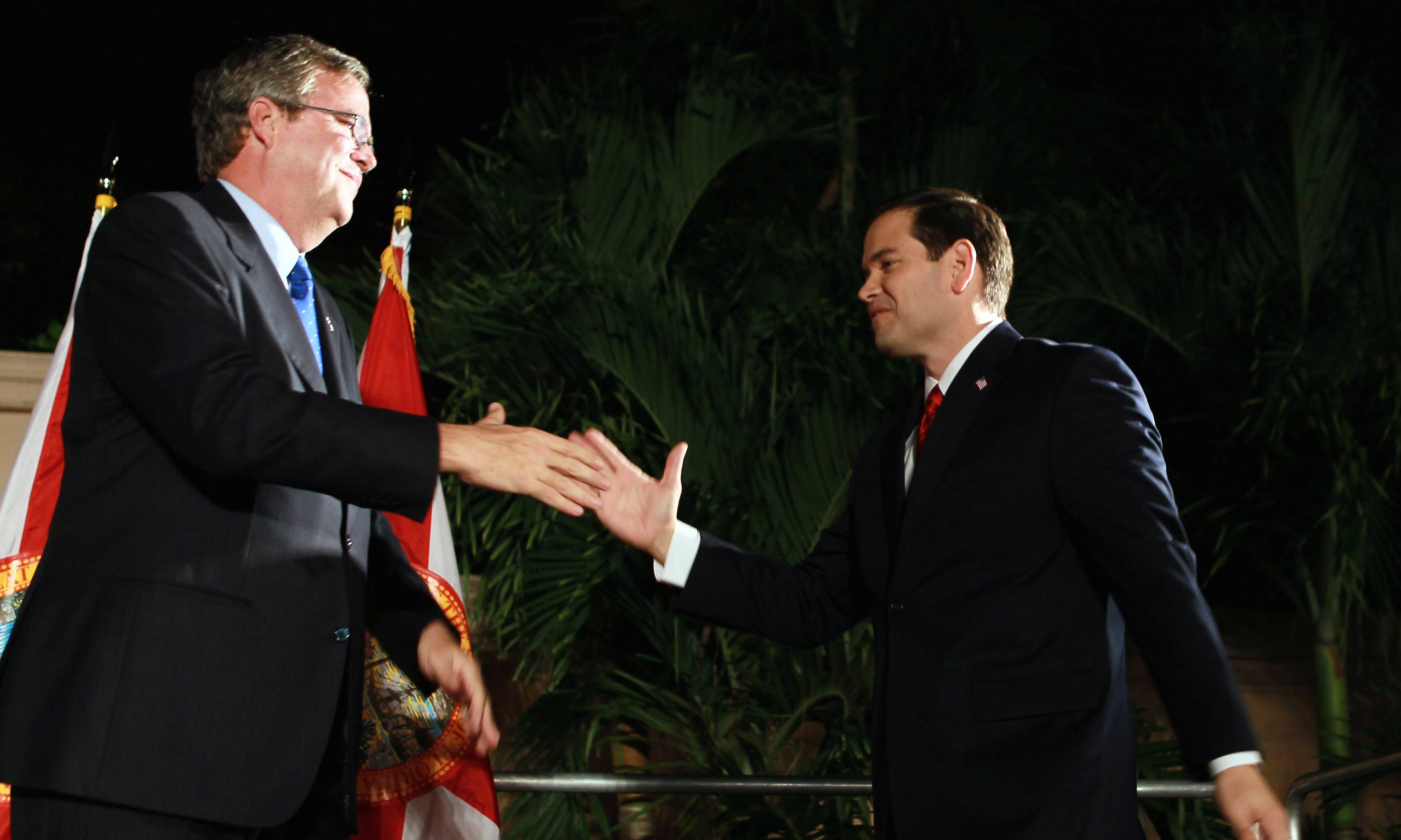 What if they held a presidential campaign and a think tank broke out? House Budget Committee Chairman Paul Ryan, who is considering running for president, offered his thoughts on poverty last week. Sen. Marco Rubio has been giving regular policy speeches on poverty, college loans, and helping the middle class. Former senator and GOP presidential candidate Rick Santorum is promoting a book of policy proposals on education, family, and revitalizing American manufacturing. Sen. Rand Paul is offering ideas on criminal justice and will give a big foreign policy speech in the fall. Louisiana Gov. Bobby Jindal has given speeches on health care and education aimed at a national audience. His staff recently sent an email titled "policy leader" that linked to a Time piece about how he is preparing to be the candidate of ideas in 2016.

Who isn't trying to be the ideas candidate in the 2016 campaign? Texas Gov. Rick Perry is working to overcome his 2012 debate aphasia, so he's trying to show some policy chops. Though former Florida Gov. Jeb Bush holds controversial ideas on Common Core education standards and immigration, those close to him say he won't run unless he can promote those ideas with gusto.

It isn't usually this policy-thick in the GOP presidential field. In primaries, there is sometimes one conservative candidate who tries to position himself through the creativity of his proposals, but mostly candidates engage in displays of strength on questions of orthodoxy--how much they want to cut taxes, shrink regulation, and lock up the borders. Now the Republican candidates are not only seeking to distinguish themselves from each other with the quality and originality of their ideas, but they are making the case that unless the party promotes new ideas, it will not prevail.

The class of candidates for 2016 has the potential to be the most robust in almost 40 years--perhaps in modern Republican history. It depends on who finally decides to run, of course, but six governors and four senators are thinking seriously about it. Popular but implausible candidates like Herman Cain and Michele Bachmann have not emerged. If you were an excitable type, you could really get your hopes up that the high caliber of the candidates might connect with the energetic issues debate taking place in the conservative movement and spur an actual public discussion and competition of ideas.

The challenge for any conservative policy fans is how to promote ideas in Washington these days. Groundbreaking notions must get through the congressional permafrost of self-preservation, risk aversion, polarization, and limited attention. Even if Republicans take control of the Senate, GOP leaders are too weak to push unfamiliar ideas through an institution that can barely accomplish the basics of governing.

The presidential competition offers the best venue for idea promotion. The contest will get a lot of media coverage and voter attention, and candidates have political incentives to focus on policy. Lesser candidates can get coverage and raise money by promoting original policy ideas. It's very helpful to show a donor skeptical about your 2016 chances a few clips or blog entries talking about how innovative and interesting your ideas are. (The downside is that this donor will then burden you for months with all of his fascinating and unworkable ideas). If you are a senator, talking about ideas helps elide the fact that you have no experience implementing them. For governors, speeches about national policy challenges make you look less parochial.

The question is whether ideas can actually survive once the race is joined in earnest. The 2012 GOP primary was a purity test. At one debate, no candidate would consider a budget proposal whereby $10 in savings was traded for a dollar in tax increases. Mitt Romney kept a pillow over his Massachusetts health care reform, his signature achievement as governor, for fear of raising unfavorable comparisons to Obamacare. On immigration, the competition to show who was more conservative pushed Romney to promote "self-deportation" for undocumented workers. Newt Gingrich fancied himself the ideas candidate--and he had a few good ones--but when he strayed from the orthodox support for Ryan's Medicare plan--calling it "right-wing social engineering"--he was hounded into silence. When he did emerge as a candidate a tthe top of the field, it wasn't because of his ideas on brain science, but because he was seen as a good fighter who could bloody President Obama. Herman Cain's 9-9-9 tax plan--the most memorable idea of 2012--forced the candidates to talk about their plans for taxes, but was largely a novelty.

Those forces could take hold again; indeed, they likely will. Conservatives who participate in primaries want to know where candidates stand on the bread-and-butter issues. That means candidates are going to seek out differences with their opponents where they can achieve the most politically. Fancy theories are nice, but voters take their cues based on what they know. Paul can endure silence from his audience at the Iowa GOP convention in the spring of 2014 when he challenges them about the GOP's attitude toward convicted criminals, but in the fall of 2015 every incentive will be to keep the focus on the red meat. The debates will encourage the same. Networks will seek out conflict, which is likely to be on the familiar grounds of immigration, spending, taxes, and Obama is awful. That isn't a modern phenomenon. In a 1980 New Hampshire debate, Bob Dole was charming about the lack of discussion of the issues.

All the incentives are for candidates to give speeches now, when the stakes are low. As a political matter, simply gaining the patina of being an "ideas candidate" might be enough to win over voters who like the idea of an ideas candidate but don't really want to wrestle with complex policy. When the primaries heat up, you can coast on your "ideas" while stumping in the traditional grooves.

What might keep this policy competition from getting swamped by the usual political pressures is that the candidates promoting them think they are vital to the future of the party. Jindal thinks that by promoting policy answers to people's everyday problems, it will rescue the Republican Party from being, as he called it, the "stupid party." Santorum argues that only by promoting a set of issues that show a concern for the poor and an appeal to the middle class can the party survive. "We can win every businessman's vote and still lose elections by landslides," he says. "As far as a lot of workers in America are concerned, we don't care about them." That all sounds promising in the summer of 2014, and without a principal villain like President Obama, there will be time to talk about other things in the next presidential race. But the challenge in talking about ideas during a campaign is the same with implementing them: Can they survive a confrontation with reality?