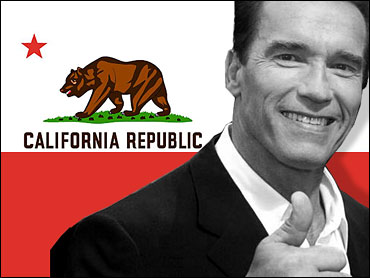 
California Gov. Gray Davis was removed from office by an electorate clearly unhappy with his performance as governor, and concerned that the Golden State had lost some of its luster. While Davis could not overcome the voters' unhappiness, Arnold Schwarzenegger easily overcame the allegations of groping that dogged him late in the campaign.

The former actor heads for Sacramento with the support of voters of all stripes, including many Democrats, as well as many of the Hispanic voters that Lt. Gov. Cruz Bustamente had hoped to capture.

Although Democrats and the Davis camp had held out hope for a last-minute turnaround to save the governor's job, a CBS News Exit Poll of California voters conducted by Edison/Mitofsky revealed that many voters had in fact decided long ago to recall their governor. Sixty-seven percent decided on their vote more than a month ago and just 15 percent decided how they would vote on the recall in the campaign's final week.

Bustamante, who was vying to become the first Hispanic governor of California, did not appear to get the support he had hoped for from Hispanic voters. While he did get the backing of a majority - 52 percent - - Schwarzenegger held his own among this group, drawing 31 percent of Hispanics to his camp.

64 percent of voters said Schwarzenegger did NOT address the issues in enough detail during his campaign, and 31 percent thought he did. This did not derail his effort to reach Sacramento, though, and among those who said he did NOT give enough detail on the issues, 25 percent still voted for him nonetheless.

Of those who came to the polls, 8 in 10 said the state's economy was in bad shape. But there was less agreement as to whether the state's problems can be solved without raising taxes; 46 percent said it could be done, while 48 percent didn't think so. 70 percent are against the idea of issuing drivers licenses to illegal immigrants.

While white Californians strongly supported the recall (60 percent to 40 percent), blacks opposed the removal of Gray Davis by 73 percent to 27 percent. But Hispanics were more divided in their vote: 54 percent of Hispanics voted NOT to oust the incumbent Governor, but 46 percent voted to remove him from office.

Davis and his supporters had hoped that strong support from union members could help the Governor stave off the recall attempt. Union voters were against the recall, but not overwhelmingly so, going against it by 55 percent to 45 percent. Also, 42 percent of union-member voters voted for Schwarzenegger.

Davis has high numbers of voters disapproving of the job he is doing. But even 28 percent of those who disapprove of his job performance still voted to keep him in office.

Davis lost significant ground among Hispanics today even though 54 percent decided NOT to recall him. Davis had much stronger support in both 1998 and 2002 among Hispanic voters. In 2002, 64 percent voted for him and in 1998 more than eight in 10 Hispanic voters cast their vote for Davis.

While a large majority of liberals came out and voted against the recall today, support for Davis among that group has waned since his first bid for Governor in 1998. Back then, just 7 percent of liberals voted for Republican Dan Lungren over Davis. Twenty-four percent of liberal voters voted to remove Davis from office.

Gray Davis has lost support among all age groups since his first race for governor in 1998, but the most significant loss for support is among those age 30-44. This age group supported Davis in both 1998 (59 percent) and 2002 (49 percent) but these voters voted strongly for the recall today by 55 percent to 42 percent

While voters who are union members came out against the recall at the polls today by 55 percent to 45 percent, Davis' support among this group was not as strong today as it was in 2002. Back then, 64 percent of union voters cast their vote for Davis, while just 30 percent voted for Republican Bob Simon.