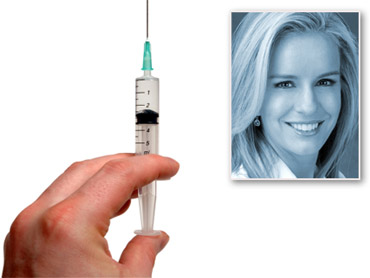 It's National Influenza Vaccination Week, and this year, for the first time, health officials are urging nearly everyone to have a flu shot.

On "The Early Show," CBS News Medical Correspondent Dr. Jennifer Ashton explained the flu season goes through the end of March into April, so it's important to act early to be protected.

"It is not too late (to get your shot)," Ashton said. "And we're really just in the beginning of it."

"Early Show" co-anchor Erica Hill said, "Generally you hear about it in the fall, and everybody is freaking out and everybody has to get your shots. It was fairly quiet this year. But that's not a reason to avoid it."

Ashton said, "Correct. This year the (Centers for Disease Control and Prevention) recommended pretty much everyone over the age of six months old get vaccinated. The only difference, the qualification in the six months to 9 years age group -- if it's the first time children are getting a flu shot -- they will need two doses separated by four weeks, everyone else, 9 and over can get one dose, the mist, the injectable form. You can get it now."

Hill added, "There's plenty of it this year, we should point out."

And this year, Ashton said, you don't need to get a separate H1N1 vaccine --it's all in one vaccine.

As for flu activity this season, Ashton said "it's been quiet so far."

She reported most of the cases have been concentrated in the south of the U.S.

"Georgia, among school-aged children and a little bit in Alabama," she said. "But we have to caution, it is very early in the season. It takes two weeks to get the immune protection after you are vaccinated. So it is far from too late to get vaccinated. You can still get the protection."

Ashton said the most dominant strain of flu this year so far is H3N2, also strain B of that type.

"But H1N1 in is still out there," Ashton said. "Good news it is in the vaccine."

Ashton added there's a difference in the vaccine dose this year for people 65 and older.

"It is four times stronger than the other dose," she said. "That's important for people 65 and older because their immune system can take a bit weaker, they take more of the flu antigen as we call it to get the protection. You can ask your doctor if you are 65 and over for that."

To fight the flu on a daily basis, Ashton recommended people wash their hands and cover their nose and mouth if you're coughing.

And if you or child is sick, stay home.

Ashton said, "You are not doing yourself a favor or anyone else."