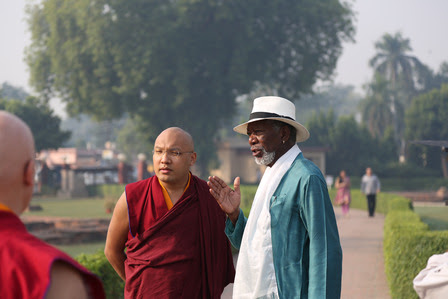 When people think of Morgan Freeman and God, it's hard to forget his role in the 2003 comedy "Bruce Almighty." But in a new project, Freeman is flipping the script and allowing the world the opportunity to define for themselves their meaning of God.

The Academy Award winner acts as host and executive producer of National Geographic's new six-part series, "The Story of God with Morgan Freeman."

Freeman takes viewers on a trip around the world as he explores different cultures and religions. The show, produced by Revelations Entertainment, touts itself as the ultimate quest to uncover the meaning of life, God and all the questions that exist in between.

This project for Freeman was a no-brainer, following his work on the Science Channel's "Through the Wormhole."

"We again found ourselves visiting these questions of creation and what happens in the afterlife, and it was just sort of a natural segue into the question of God," the legendary actor told CBS News.

Freeman says he was already firmly planted in his own spirituality, but the show gave him the opportunity to ask questions and interact with different communities.

The actor says it's important to him what the viewers take away from the series.

"In this situation, we're hoping that the public at large gets the lesson of the sameness of the human condition," he said. "We're not as different as we might think we are, we're all seeking the same thing and asking the same questions, and basically coming up with the same ideas about who we are, what we are, and where we are going."

"The Story of God with Morgan Freeman" airs on National Geographic on Sundays at 9/8c.