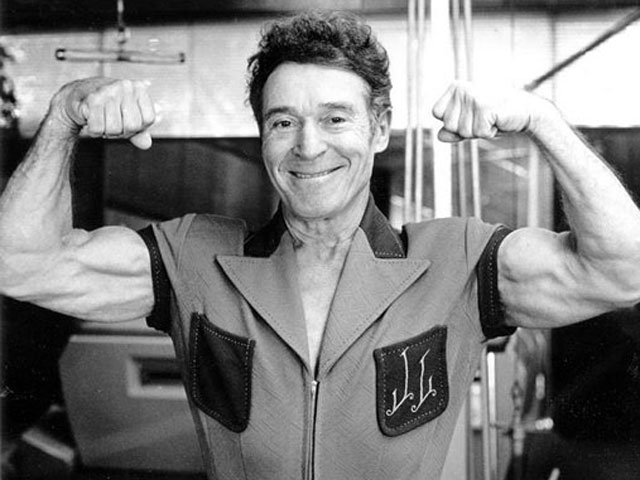 (CBS/AP) He was a fitness guru long before anyone cared about fitness or was called a guru. Now he's gone.

Jack LaLanne, perhaps America's greatest champion of getting your butt off the couch and working out, has died at 96.

In the end, it was respiratory failure due to pneumonia that took LaLanne, his longtime agent Rick Hersh said.

"I have not only lost my husband and a great American icon, but the best friend and most loving partner anyone could ever hope for," Elaine LaLanne, Lalanne's wife of 51 years and a frequent partner in his television appearances, said in a written statement.

Today, we are inundated with infomercials for exotic exercise equipment that can fix anything from your abs to  your buttocks to the mushy flesh hanging off the back of your arms, but five decades ago LaLanne was it.

And he made it look fun and easy. His energy was infectious, his triangular physique flawless - even into his later years. His fitness show was a huge hit from the 50s to the 70s. His technique's for boosting your body required nothing more than a towel, a chair, and the will to get healthy. In later years, he promoted juicing raw fruits and vegetables.

"The only way you can hurt the body is not use it," LaLanne used to say. "Inactivity is the killer and, remember, it's never too late."

LaLanne is survived by his wife, two sons, Dan and Jon, and a daughter, Yvonne.