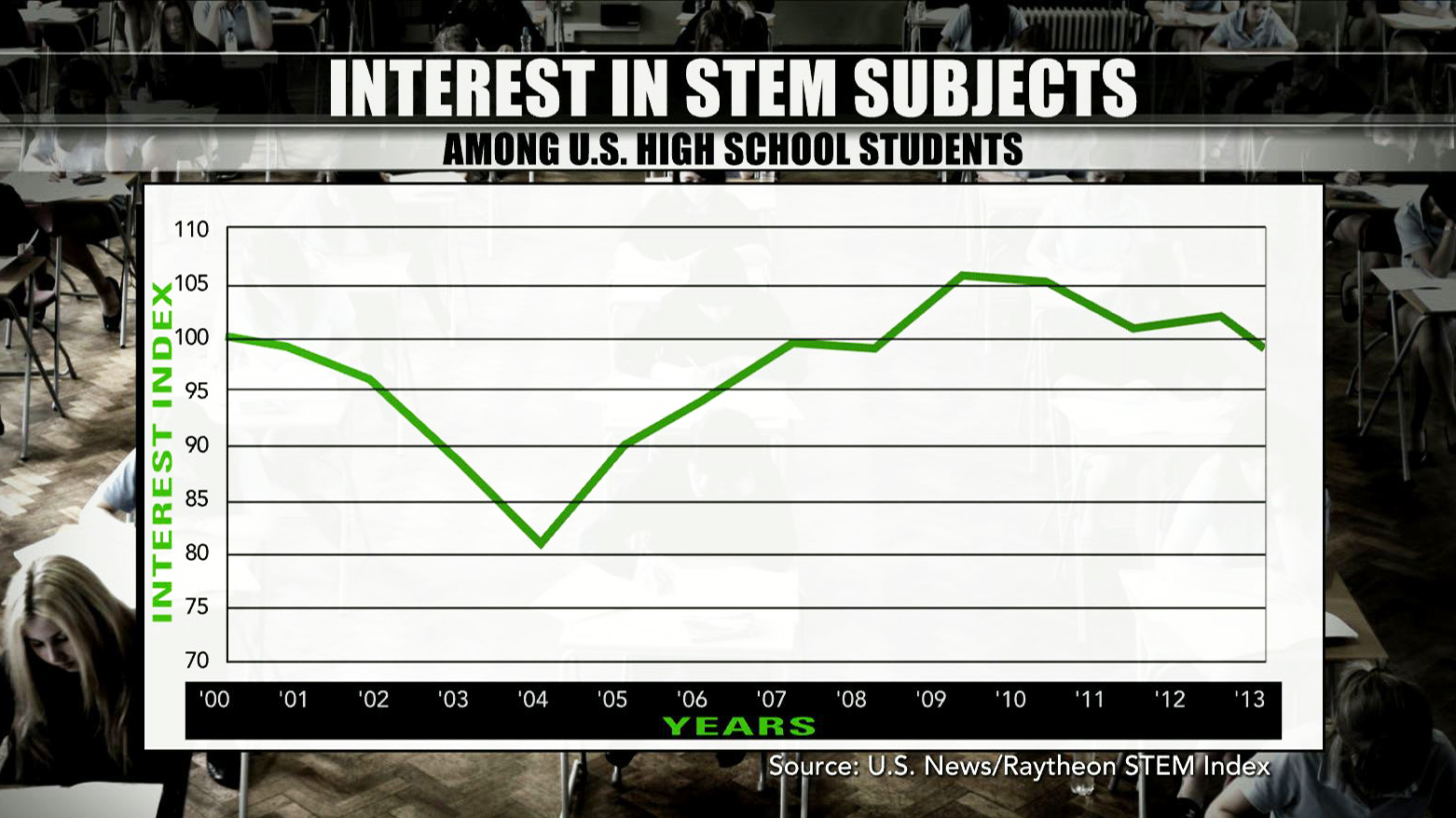 Twenty percent of all jobs in the United States require knowledge in at least one STEM (science, technology, engineering or mathematics) field. But a study out Wednesday by U.S. News and World Report finds America isn't producing enough workers to keep up with demand.

Part of the problem is a lack of interest, but women and minorities are also under-represented in STEM-related fields.

According to the report, high school students' interest in STEM disciplines dropped between 2009 and 2013. Kelly told the co-hosts that these statistics "surprised" him.

"We've had a lot of talk about how important this is. We see what the job picture looks like. These are the jobs of the future - technology jobs. But, enough kids are not taking those courses and learning those skills to fill those jobs," he said.

However, Glimcher said she was not surprised by the findings.

"I think the popular conception of a scientist is some guy with big nerdy glasses and a pocket protector, who sits alone in his own little laboratory dreaming up crazy eccentric things," she said. "And that is not what science is all about. Science is an incredibly wondrous field."

Glimcher said that the onus to portray science in a different way is on everyone.

"We need to get to young girls and young boys when they're in kindergarten. When they're in elementary school and mentor them," she said. "I was fortunate I grew up in a family where my parents were very supportive of science and when I started dissecting frogs when I was six, you know my sisters were horrified but my parents said 'Ok, go for it.'"

In a new report among 34 developed countries, the U.S. ranked 26th in math and 21st in science. Those rankings left many people concerned about the country being competitive in a new technological world.

When asked what we can do about it, Kelly said that what's important is "the jobs are not just science."

"These jobs are energy jobs. You can't drill oil wells now without a technology background. Your dental hygienists has to have some science ... you don't have to be a Ph.D. engineer to fill these roles," he said. "When you talk about the 20 percent, it may be as high as 50 percent of the jobs in the economy need some STEM skills."

Glimcher discussed the fact that many of these jobs are viewed as high tech and need a lot of more education to be successful.

"We need to instill confidence in women and we also need to ... communicate. Scientists need to communicate better the wonder of science," she said. "You know there are as many cells in your brain as there are galaxies."

"If you look at the labor pool, particularly the Hispanic population, that's where the work force is going to be in the next ten years," said Kelly. "And certainly with what we've seen so far, they're not keeping up with this."

To see the full interview with Dr. Laurie Glimcher, and Brian Kelly, watch the video in the player above