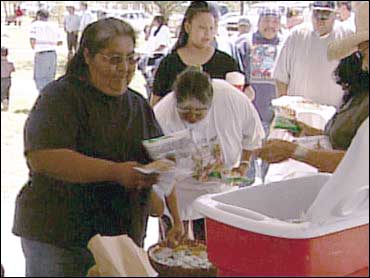 Obesity is about to become this country's leading cause of preventable death. Lack of exercise and too much food are not only making us fatter, they're leading to increases in other diseases, such as diabetes.

Nowhere is that more painfully apparent than in southern Arizona, where the fattest Americans live on two Indian reservations. How and why they became obese, and what it means for the rest of us, is the subject of an intense study.

Until a couple of generations ago, the Pima and Tohono O'odham Indians of southern Arizona didn't even have a word for diabetes. But now, this preventable disease, along with obesity, is killing them. Correspondent Vicki Mabrey reports.

Off the reservation, Johnson can escape the disease that's plaguing his tribe. He's an accomplished artist, a basket weaver whose work has been displayed by the Smithsonian. But back on the reservation, where obesity is an epidemic, he's like everyone else.

"On the reservation, we have this joke where, when you go and shop for clothes, you have your large, your extra-large," says Johnson. "You know, we always say, 'Well, we have our O'odham size,' the Indian size, which is like 3X, 4X."

Johnson adds that it's rare to see a thin person on the reservation: "At events that we have, we see someone who's skinny and tall and a lot of elders will say, 'You know, that's how we used to be. We used to be like that.'"

Scattered across a reservation about the size of Connecticut, the Pima and Tohono O'odham Indians lived off the land for thousands of years.

A film from 1933 shows them farming the desert, growing their pima cotton and oranges. What you won't see are any fat people. But that was before the once-mighty Gila River, that watered the desert, was dammed to provide water for Phoenix, just 20 miles away. And it was before the men left to fight in World War II. When they returned, their farms were dried up, and the people were left starving. The government stepped in with surplus food -- lots of white flour and lard.

"They had to learn how to say certain things like Wonder Bread, peanut butter," says Johnson.

Now, desert farming is all but gone, and in its place is fast food and "fry bread," a deep-fried combination of flour and lard. It's also common to see 300-pound adults.

But it's not just obesity. Diabetes is also ravaging the reservation, and the life expectancy for a man has dropped to 57.

At 59, Robert Porter is a tribal elder. He was once a marathon runner, carrying on a centuries-old tribal tradition, before diabetes infected his feet.

"People were strong, physically strong," recalls Porter, of a time before diabetes became a common disease. "Our young men used to run from village to village just for the fun of it. Our Pima-Maricopa people were runners. Strong runners; silent runners."

"So what we can do here at this facility is try to make sure that they're as functional as possible," says Yamada. "Because once they have below-the-knee or above-the-knee amputation, they become wheelchair bound, or think they have to be in a wheelchair. Their rate of visceral deterioration is accelerated. And they just sort of give up on life."

The hospital is where you'll see the ravages of the disease. Before diabetes kills, it robs eyesight, shuts down kidneys, leads to heart disease and stroke, and deadens limbs. Porter has lost his mobility because of diabetes.

"Just the other day I was saying to my wife, 'It's either gonna beat me or I'm gonna beat it.' And my heart tells me I will die," says Porter. "But while I'm on this earth, I want to do something to help others afflicted with the disease."

So he's doing what thousands of other Pima Indians have done: volunteered to be a part of a massive government research project run by the National Institutes of Health. In the process, the Pima are becoming America's test case for obesity and diabetes. Dr. Clifton Bogardus leads a team of scientists trying to find out why these Indians have become the fattest people in the fattest country on earth.

"We suspect that genetics has a lot to do with it," says Bogardus. "Something that they inherited from their forefathers and passed down that presumably in the past may be a gene or set of genes that was in some way advantageous to them."

This is advantageous because of a so-called thrifty gene – a tiny bit of DNA that scientists believe once helped all of us during times of famine by storing fat. But our famine days are long gone, and that gene, along with the modern American diet, is working against us. And for these American Indians of the Southwest, it's causing obesity and diabetes at a rate never seen before.

"Over the age of 35, it's now more common to have diabetes than not to have diabetes. Probably more like 70 [percent]," says Bogardus, adding that in the general population, it's much lower – approximately 6-8 percent.

And it's rising. What scientists are learning from studying the Pimas' diet, metabolism and genes, is that a genetic mutation first makes them overeat and become obese. Then, they think another mutant gene kicks in, triggering the diabetes.

In the Phoenix NIH lab, they're searching through billions of genes, and they're closing in on two culprits: chromosomes 1 and 11.

But finding chromosomes doesn't mean finding a cure. And after decades of testing, and more than $100 million tax dollars, there is only advice: Eat less and exercise more.

Bogardus and his team have discovered that even a small weight loss – as little as 7 percent of body weight – can drastically reduce the odds of getting diabetes.

The Pimas have taken the advice to heart, building a new workout facility at the reservation hospital. But their children have become the latest concern. Adult onset diabetes, once known as a disease of the elderly, is now spreading to children as young as 4.

At St. Peter Indian Mission School, many of the 200 students are overweight and at risk. Their principal, Sister Martha Mary Carpenter, is fighting back.

"We have a running program. When the kids get off the bus, they throw their book bags against the fence. And they run," says Carpenter. "First thing in the morning. We just kick that metabolism in."

Carpenter also took on the federal government, getting permission to modify the federal school lunch guidelines for her students.

"The guidelines say that you have to have a certain number of carbohydrates in your meal," says Carpenter. "If we would give those to our children, they would just blimp out."

Lunch at the school includes ham, potatoes, green beans, watermelon, fat free milk – and no sugar. "That's the rule, and we really observe it religiously," says Carpenter, who adds that it works. "None of our children are diabetic. None."

Johnson was diagnosed with diabetes when he was 28. It was then that he and his business partner, Tristan Reader, decided to put their faith in food, too – into the foods that grow in the desert.

Past generations used to live on natural foods like cactus fruits, and native foods such as squash, melons, and the tepary bean.

"You must have been skeptical that you could grow a bean that grew here hundreds of years ago and it's going to save someone's life now," Mabrey asks Reader.

"Part of me might have been skeptical. But I also knew that it had served the people here for generation upon generation," says Reader. "And it's only recently that diabetes has come. So we began to ask what's changed?"

It had been so long since these foods were grown that some, particularly tepary beans, were nearly extinct. But they found some at a seed bank in Tucson, which gives away the seeds for free just to get the Indians to try them.

But can it really be that simple? Could desert plants really prevent obesity and diabetes? Scientists aren't sure. But Reader and others are ready to try anything -- to be healthy again.

With some luck and a little rain, Johnson and Reader had a good harvest. They gave away desert food to anyone who could carry it. But this small farm won't produce enough for the tens of thousands of American Indians who are obese and diabetic. This is a place where, for decades now, the most prolific growth in the desert has been the cemeteries.

"There's been many moments when you're sitting at a funeral knowing that your relative, your aunt, your grandfather died of diabetes," says Johnson. "That moment is when we all think, 'We have to do something or we're next.'"