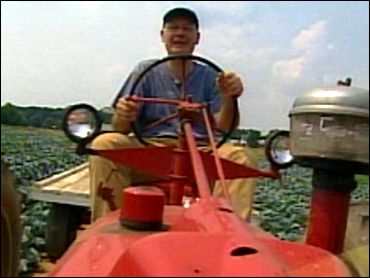 If you've ever wondered how The Early Show co-anchors all started their careers, you're going to find out this week. On Tuesday, Harry Smith kicks of "My First Job" series by going back memory lane. The following is his report.

I was the baby of the Smith family, the youngest of eight. My five brothers and two sisters and I are as different as siblings can be, but there is at least one thing all the boys have in common: As kids, our father sent us to work on a local farm.

It seems like Dad just said, 'This is part of your education.' And what a lesson you learned being out here every day!

Three of my brothers, Bill, Sam and Ron, joined me recently at the site of the old farm in our hometown of Lansing, Ill., for a trip down memory lane.

"I think I cut asparagus at 6 in the morning, before school, early spring," says Sam.

But what did they do with their weekly payhecks?

"Give it to mom and dad," Sam answers and notes, "There's only one guy here who didn't do that."

"I never had to turn my check over," Bill says, laughing, "Maybe that's something to do with being a little smarter - I don't know."

Our reunion, while full of laughs, is also a little bittersweet. The farm of our childhood is no longer - lost to its owner's retirement and to suburban sprawl.

If I truly wanted to relive my first job, I'd need to find a new garden. Not that difficult when you work right next door to the Garden State.

Just off exit 7 of the New Jersey Turnpike is Robson's, a third-generation family-run farm producing beets to beans, and everything in between.

Neil Robson farms over 1,500 acres here. He agreed to let me get my hands dirty. So I got busy.

It's been a few years since I did this. When I first started, right out of junior high school, I think I got paid either 35 or 50 cents an hour.

"Wow, that's definitely been a few years ago," notes Robson

That's a couple of years ago. But is there anything different about cutting cabbage? Just turn it over, like, and you kind of cut some of the bottom off and you get picture-perfect, farm-fresh cabbage.

There are skillful guys who do a faster job, so mine was to carry the stuff out of the fields and load it onto the wagon or onto the truck. A box may weigh about 50 pounds, so if you do that all day, it is very good exercise, very good preparation for high school football.

Do most people you encounter -outside of agriculture - have any idea what it takes to put a head a cabbage in your grocery cart?

There are a lot of easier ways to make a living.

"Yeah," Robson says, "I just wasn't smart enough to figure that out, I guess."

I can remember when I was a kid and I first started on the farm. They don't want you to screw anything up. So they put you in a bed, and say, "Go weed it." And so literally on your hands and knees, you go through one weed at a time. This is how you learn the business. It is literally from the ground up. If nothing else, it will help you develop a work ethic.

But having worked on a farm as a kid, being back makes me feel kind of like a kid again.

Robson's farm employs more than 60 laborers in the summer months, but Neil says none of the local kids are interested in working here anymore. Many years ago, it was the best option for me and my brothers.

And seeing them reminds me that as much as times may change, some things will always remain: The value of a dollar earned, the history that forever ties us together, and the taste of just-picked summer vegetables.