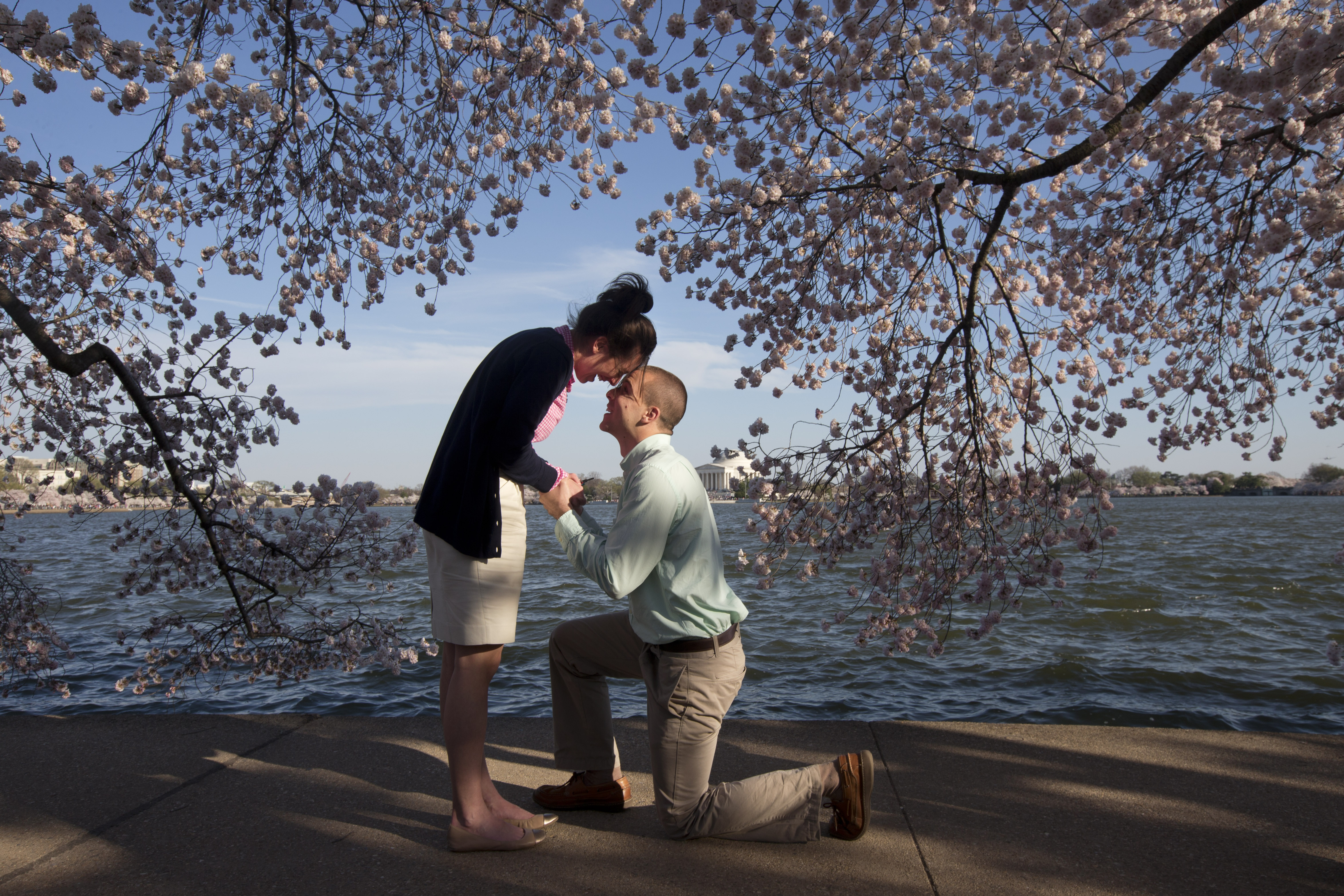 WASHINGTON -- Steve Paska waited two weeks for Washington's famously fickle cherry blossoms to emerge, then spent two hours searching for the perfect spot beneath the canopy of fluff. He lured his girlfriend there on the pretext of buying a painting of the blooms. Then he surprised her by dropping to one knee and proposing.

She said "yes" so fast he forgot to pull out the ring.

Go to any wedding celebration this nuptial season, whether in a ballroom or backyard or church basement, and it's a good bet you can trace the big day to a similar start, with different flourishes.

If a man is marrying a woman somewhere in America, odds are that he proposed to her.

That may seem obvious, but consider this: Three-fourths of Americans say it would be fine for the woman to do the proposing, in theory.

In practice, only about 5 percent of those currently married say the woman proposed, and the figure is no higher among couples wed within the past 10 years. Attitudes actually seem to be trending the other way, an Associated Press-WE tv poll shows.

Young adults are more likely than their elders to consider it "unacceptable" for a woman to do the asking. More than one-third of those under age 30 disapprove.

While Paska, 26, believes female proposals are OK - after all, one of his sisters proposed to her boyfriend - he wanted to declare his love and dedication the traditional way.

"I think If she'd gotten down on one knee and asked me the question," Paska said, "I would have called for a timeout."

In the survey, nearly half of single women who hope to get married someday say they would consider proposing. Paska and his fiancee, Jessica Deegan, who both live in Arlington, Virginia, already had decided together that they wanted to marry, she said. Still, Deegan was thrilled that he made it official with a grand romantic gesture on April 10.

"It's kind of like the moment you imagine your whole life," she said. "I've seen that in movies. I've read that in books. You don't want to miss out on that moment."

That traditional moment has survived radical changes in U.S. marriages over the past half-century. People are marrying older; brides are more likely to be already supporting themselves. It's become commonplace to live together first, even to have children before marriage. Some men are proposing to men and women to women, now that one-third of U.S. states allow gay marriage.

But the boy-asks-girl proposal still reigns, updated to a public art form in Facebook and YouTube videos that feature flash mobs or scavenger hunts or proposals while skydiving or swimming with dolphins. "Destination" proposals are trending, too, for men who want a California beach or the Eiffel Tower as the setting.

There are even "proposal planners" who can help arrange flowers, musicians and a videographer. Ellie Pitts, a planner who works in Dallas for The Yes Girls, said the group has handled more than 350 proposals around the country and abroad, nearly all by men.

A few clients were lesbians. Only one so far was a woman asking a man - a boyfriend whose proposal she had turned down previously.

"I think it probably takes a woman with a lot of guts to be able to do it," said Pitts, who is newly engaged herself, to a man who did the asking. "At least in my experience with my girlfriends, women tend to be a little more ready to get engaged and move forward than men are, so asking the question before he asks might tend to backfire."

A woman who proposes also risks criticism for her boldness, said Katherine Parkin, an associate professor of history at Monmouth University in New Jersey.

Parkin researched the folk tradition that claimed women could propose only during a leap year. She found that the idea triggered mockery every four years for much of the 20th century. Postcards, ads and articles portrayed women who would propose as desperate, aggressive and unattractive. The leap year joke has faded, she said, but the stigma lingers.

"I don't see much changing to challenge that notion, to say a regular woman, a good woman, could propose," Parkin said, although she notes that a few celebrities, such as singer Britney Spears, have done so in the public eye.

Becky Paska, sister of Steve, said she worried that proposing to her longtime boyfriend, Danny Brady, might make him feel embarrassed or emasculated.

But she wanted to demonstrate the depth of her commitment, because years earlier she had accepted Brady's surprise proposal and then backed out.

So Paska, 28, asked for his hand at the Thanksgiving dinner table as her family was reflecting on their blessings.

Paska, of Richmond, Virginia, and Brady, of Charlottesville, Virginia, plan an August wedding on the beach.

In the AP-WE tv poll, recently married couples were less likely to say they got engaged by "mutual agreement," instead of through one partner's proposal, than were people married longer. About one-quarter of those married at least 30 years say it was a mutual decision; that drops below one-tenth of those wed in the past decade.

Among the newer unions, 83 percent said the man proposed.

That may reflect today's emphasis on creating a good proposal story to share with others.

Pitts, the proposal planner, said her clients usually have discussed marriage with their girlfriends and sometimes they shop for rings together before the man formally "pops the question."

The Rev. Joel Stafford of Patton, Missouri, sees nothing wrong with women taking the lead, the way his future wife did more than 40 years ago.

"It just got to the point where she said, 'Why don't we get married?' and I said, 'Of course," Stafford recalled. "I would have eventually built up the courage to do it myself. But she didn't wait."

They did wait a little longer for the ceremony, so she could graduate high school. Stafford and his wife, Sherry, married in June 1973, raised four children and have 13 grandchildren.

"Whether you are the boy or the girl, if you feel you are at the point you want to make a lifetime commitment, express that," Stafford advises. "Don't be shy like I was."

The poll was conducted in conjunction with WE tv from Jan. 17-21 using KnowledgePanel, GfK's probability-based online panel designed to be representative of the U.S. population. It involved online interviews with 1,060 adults and has a margin of sampling error of plus or minus 3.9 percentage points for the full sample.

Respondents were first selected randomly using phone or mail survey methods and were later interviewed online. People selected for KnowledgePanel who didn't otherwise have access to the Internet were provided with the ability to access the Internet at no cost to them.