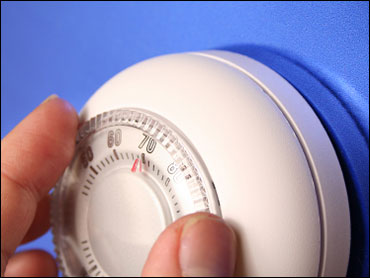 When it comes to women compared to men and temperature settings, more often than not, women will say they feel colder.

Turns out, there's a biological explanation behind this heated battle at the thermostat, reports CBS News Correspondent Kelly Cobiella.

Women conserve more heat around their core organs, which means less heat circulates throughout the rest of their body.

Terri Slater and her husband, Richard, who have been married for five-and-a-half years, are all-too-familiar with this biological predicament.

The temperature outside their Boca Raton, Fla. home was 85 degrees on a given day. But the battle inside was just as heated - they admit sneaking around, constantly changing the temperature!

The tug-of-war over the thermostat can get worse at night, when our bodies produce less cortisol.

According to Dr. Tamara Kuittimen, cortisol is a very powerful hormone. It's your fight hormone. So it keeps you warm, gets your adrenaline roaring and helps with body warming.

As it gets later, women can get even colder.

Some cars even enable you to control the temperature independently on each side.

Beside the biological reason, are other factors involved?

"The answer is 'yes,' Ashton replied. "There can an combination of factors at play. You talk about medical reasons. Probably the two most common for women are anemia or a low blood count or an underactive or low-fuctioning thyroid. Both of those can make you feel colder. Very easy to diagnose and treat."

If this news is giving you the chills, don't fret - there could be some benefits to being colder. What are the perks?

For that and much more, click below to see the entire Ashton interview: