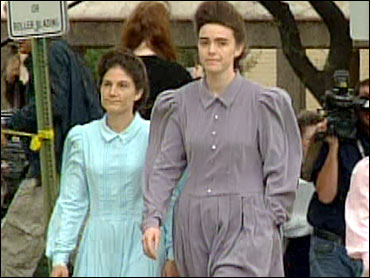 The women in the polygamy sect in western Texas that's at the center of the storm involving child sex abuse allegations dress in a distinctive way -- in drab, 19th century pioneer-style outfits, and with their hair up, in braids and buns.

What's the thinking behind such garb?

On The Early Show Friday, Carolyn Jessop, a former member of such a sect and author of the book, "Escape," explained it.

She was born into polygamy, got married at 18 and had eight children with her husband, who was 32 years her senior. She escaped polygamy with her kids in 2003 at the age of 35, citing extreme emotional and physical abuse by her husband.

Many experts say the polygamist women's attire is restricted as much as it is because, if all the women dress the same, there's nothing individual about any of them, and they're just part of a whole. Others say polygamist women are made to adhere to dress codes to exert control over everything in their lives.

Clothing and hairstyles actually vary from sect-to-sect among polygamists. The one in Texas requires women to wear pastel prairie dresses modeled after 19th century Mormons. Most of them wear their hair in a loose braid and are covered from their neck down to their feet by the long dresses.

Jessop told co-anchor Julie Chen, "It's a style that's evolved over generations, actually," Jessop said. "This clothing started being restricted after the 1953 raid (on a polygamist compound in Colorado City, Ariz.). And at first, it was just that women couldn't wear pants any longer and they had to wear a dress or a skirt that was a certain length, and long sleeves and no low necks. Their hair had to be combed on top of the head. It couldn't be left hanging. Then, every five or six years, there would be another restriction added. And eventually, the restrictions just were so limited that there's only about one pattern that you can make a dress out of and there's only a few colors, pastel colors, that you can use. No prints, no plaids, nothing with flowers. And then the hairstyle is just another situation that's evolved over time."

The polygamist women, Jessop noted, have "limited" say in the way they dress: "You have so many limitations on what you're allowed to do, and then, if you want to do something different than the standard hairstyle, then you may get away with it, and you may not. But one thing is it's going to have to meet standards. And the standards are, your hair has to be up. It can't be loose and it can't be hanging."

"That's been forever. That was something they started way before I was born. The concept is that, if you're trying to entice a man -- it's sexual to leave your hair hanging."

Chen wondered, "Does this all fall under the category of not letting women have a voice or any individuality or a way to express themselves?"

"Oh, yes, absolutely," replied Jessop. "It also sets you apart from society. You can't go shopping without everybody staring at you. When I went to college, you know, I didn't fit in. I was obviously different. It's a way to keep the women separated from everyone else so that -- and it also does affect your individuality and, you know, you're not allowed free expression as far as what you're allowed to wear."

Asked if, when they go out in public and see how other women dress, there's ever any griping among polygamist women who want to look more like non-polygamists, Jessop responded, "Well, I just remember as a little girl, we were taught that to wear something like shorts, that was immodest, or to wear something with short sleeves was immodest, or a low neck where you could actually see a cleavage -- that was just considered just as immoral as you could be. I remember, as a little girl, being in the car with my mother and other children and a lady walked by and she was not wearing very much. And everybody was like, 'Oh, she's wicked, look what she's doing!' It was more something where, if people dress different than what we were accustomed to, it was a kind of like a shock to our system. We were taught that we were supposed to cover our bodies and God wanted our bodies covered. So, we were taught to look down on people who put on shorts and short sleeves."