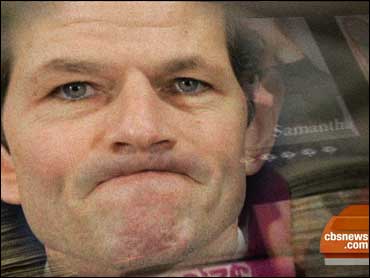 As officials investigate the activities of Indiana investment adviser Marcus Schrenker, who allegedly crashed his plane and tried to commit suicide, it appears he may have been living a double life.

And according to CBS news correspondent Bianca Solorzano, people leading double lives is not uncommon.

At first glance, 40-year-old Thomas Hulley seems like the picture of stellar normalcy. A businessman, the owner of the Long Island Banana Corporation, a married father of two, known in his upscale New York neighborhood for throwing pizza parties and movie night.

"They throw a block party every year, and everybody enjoys it. They're very generous," said Hulley's neighbor.

But he allegedly loved another life that now has him at the center of a deadly group sex romp. He reportedly split his time between suburbia and a high-end Manhattan hotel. Wait staff said they often saw him flirting and appearing intoxicated. This past weekend New York police said he allegedly had group sex at the hotel with two women.

According to a police report, one of the women, who was 41 years old, was found at the hotel unconscious and unresponsive. She was taken to the hospital where she was pronounced dead on arrival. No charges have been filed.

There has been a steady flow of men leading secret lives, who's truths have come to the surface, especially those who live in the public eye.

"I've disappointed and failed to live up to the standard I expected of myself," said former New York governor Eliot Spitzer, whose career ended when he was caught soliciting a high-priced prostitute.

Steven Trantel, a Long Island family man, who told his wife he went to work every day as a commodities trader, was busted for robbing ten banks.

Ted Haggard, a well-known Evangelical preacher, a husband and father, had his life shattered with a scandal involving him soliciting a male prostitute and crystal meth.

It seems double lives can only be secret for so long. Eventually it all catches up and crashes down.

According to Dr. Jeff Gardere, a clinical psychologist, there are a few different factors as to why this goes on.

"For one, these are thrill seekers. They really get off on being able to have this double life that brings them all sorts of excitement. They get addicted to it because they're following their own pleasure principle and know at any time they can get caught. But yet, at the same time, they feel in another way that they won't get caught. I think that's part of the self-delusion," Gardere said.

A lot of these "thrill seekers" feel so powerful and that they're entitled to lead the double lives that many of us only fantasize about. Having a fantasy is a good thing and being able to have a secret life -- in your fantasies -- is considered to be a very healthy thing by psychologists and psychiatrists, Gardere went on to explain.

Chen questioned how healthy it could be if the person is married and they are leading a second life.

"But I think part of what makes us unique is that we're able to have other lives within our minds, within our fantasies. It's important that we have some privacy," Gardere said. "Everything about us can't be known to our partners. So I think it's very healthy with the people that I work with when they do have fantasies, that sometimes they keep them secret, especially if they are healthier fantasies, it's not about hurting anyone or doing something that would be considered illegal."

"Well, women do lead double lives. Again, I think a lot of these women, they may have milder things they may be involved in. They may keep a secret to an affair they had maybe 10 years ago. We see men are socialized in many ways to use their power in order to get the things that they want to get that pleasure principle. And in many ways, we admire men that have this kind of power. We look at President Kennedy who had affairs and so on. But, of course, once they get caught, we say, 'Wait a minute that was wrong. They shouldn't have done that,'" Gardere said.

"What are the signs a spouse should look for if they think their spouse is leading a double life and cheating on them?" Chen asked.

"First of all, there are huge amounts of time that are unaccounted for because they are out there leading that double life. Huge amounts of money that is also unaccounted for because it costs to lead a double life. But I think the most important thing is there is a lack of communication, verbal communication, because that person is so invested in that other life. And physically, we see that there is less of an interaction because they do feel guilty about what they're doing, or they just no longer have the time to do both things," Gardere said.

"Is there treatment for it? To the point where 'I'm leading a double life and I'm cheating and it's not good and all that?'" Chen asked.

"Well, there is treatment. You have to talk about it. It is a catharsis," Gardere explained. "We see with all of these men, they eventually crash and burn. They can't hold on to that guilt."