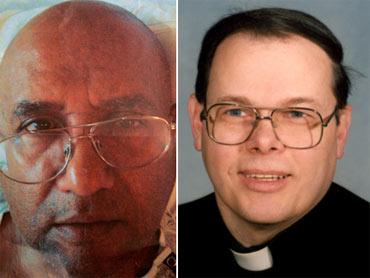 NEWARK, N.J. (CBS/AP) Officials are looking into why the 911 call made from the cell phone of slain New Jersey priest, Rev. Edward Hinds, didn't result in a police response.

Prosecutors in Morris County said a call was made Thursday evening from Hinds phone in Chatham.

It was received at a call center operated by state police outside Trenton.

The caller requested police services before the call was cut off. The operator called back and got another man who told the operator there was no emergency. That person is believed to be suspect Jose Feliciano.

According to state police, 911 cell phone calls are routed to the call center and then forwarded to the local police department in the town where the call originated.

State Police Lt. Gerald Lewis said Monday that the matter is under investigation and would not comment further, and Chatham police referred the matter to the Morris County Prosecutor's Office, which did not provide additional details.

The body of the 61-year-old priest, known in the community as "Father Ed," was found Friday morning in the rectory of St. Patrick Roman Catholic Parish. Feliciano, a longtime janitor at the church, was charged with murder and weapons offenses Saturday after investigators found the priest's cell phone, bloody clothing and bloody towels at Feliciano's home in Easton, Pa., about 45 miles west of Chatham.

Prosecutors said Hinds was stabbed 32 times in the attack and had defensive wounds on his hands and face. The men were believed to have argued about the 64-year-old Feliciano's ongoing employment at the church.