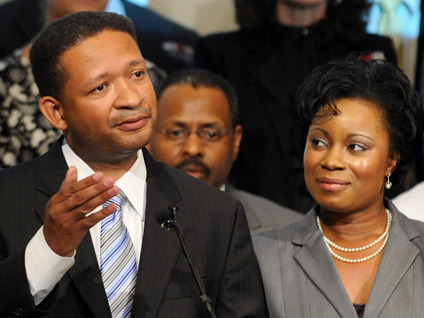 This election year is getting interesting. Just last night, we saw the first Democratic incumbent who rejected Obama's health care plan get his hat handed to him, although Artur Davis's (at left) self-consciously anti-racialist campaign may have repelled voters of all stripes and proclivities.

There are a number of ways to look at his defeat. Perhaps Alabama Democrats are racist, though I doubt that Davis feel victim to a sudden surge of prejudice. Perhaps the state's black voters perceived that they were being used as a prop while simultaneously being encouraged by Davis to choose him for the historicity of his gubernatorial bid.

Perhaps Ron Sparks ran the better of the two campaigns. I tend to think that the partisan intensity we've seen in other states extends into Alabama, and any candidate that attempts to titrate an appeal for the general election before the primary is finished will fall victim to the year's biggest shibboleth: he's not one of us.

Republican Young Guns had only modest successes last night; in Alabama's second congressional district, Martha Roby was unable to prevent a Tea Party candidate (who hired people from Doug Hoffman's staff to prove how Tea Party-ish he was) from forcing a run-off. This proves complicated for the effort to steal a seat from Democrat Bobby Bright, a district-matched Dem who doesn't have a voting record Republicans can seize on. Bright's seat will certainly flip if Republicans take over the House. Pundits are using the verb "squeaked by" to refer to the victory of Young Gun Alan Nunnelee in Al 01. Notable here: turnout deemed "pathetic" by a local county commissioner. 49% of Republicans voted for someone else. Democrat Travers Childers is the incumbent.

Read the rest of Ambinder's analysis on last night's elections at The Atlantic here. The Atlantic's Marc Ambinder is CBS News' chief political consultant. You can read more of his posts in Hotsheet here. You can also follow him on Twitter.
View CBS News In