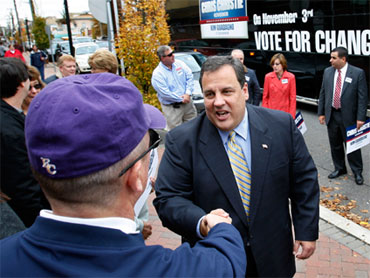 (AP)
The Republican challenger Chris Christie narrowly defeated Democrat Jon Corzine in the race for New Jersey governor. Christie is the first Republican to be elected governor of New Jersey since Christie Whitman was elected in 1993.

New Jersey's Jon Corzine was the only governor who was up for re-election this year and heading into this contest, Corzine was facing an unhappy electorate anxious about taxes, the economy, and dissatisfied with his job performance.

New Jersey's electorate was older and slightly more conservative than last year. Voters were looking for change, but while change represented the Democrat, Barack Obama a year ago, New Jersey voters saw Christie, the Republican, as the change agent this time around.

Christie received strong support from the traditional Republican base: 82 percent of conservatives backed him, as did 91 percent of self-identified Republicans.

Governor Corzine held his own among his base, getting the backing of 86 percent of Democrats, 83 percent of liberals, and 88 percent of black voters. Corzine also won the support of 57 percent of young voters, but voters age 18 to 29 represented just nine percent of the electorate. On Election Day 2008, 17 percent of New Jersey voters were under age 30.

There was a gender gap in this race with men voting for Christie over Corzine by 13 points, while women went for Corzine over Christie by 50 percent to 45 percent.

Christie performed extremely well in the traditional Republican counties of Morris and Ocean. He was very competitive in Bergen county, a large county that Corzine won more easily four years ago. Corzine underperformed in the traditional Democratic strongholds of Hudson and Essex counties.

About 4 in 10 voters did not think any of the gubernatorial candidates had a good plan to reduce property taxes. But more voters thought Christie would do a better job (32 percent) than Corzine (22 percent). Only six percent think independent candidate Chris Daggett had the best plan.

The president remains popular in the Garden State. Fifty-seven percent of New Jersey voters approved of the way he is handling his job; 42 percent disapproved. Corzine got the backing of most voters who approved of Mr. Obama, but one in five of those voters supported Christie, the Republican. 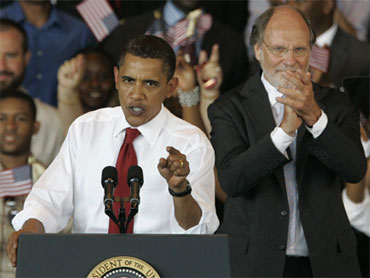 (AP)
Mr. Obama visited New Jersey three times to campaign for Corzine, even as recently as last Sunday but, New Jersey voters did not see this election as a referendum on the president. Sixty percent said the president was not a factor in their vote for governor. Nineteen percent said their vote for was to express support for Obama, but just as many (19 percent) said it was to express opposition.

The independent candidate Chris Daggett received support in the single digits. If he were not in the race, 42 percent of his backers say would have not voted, but more said they would have backed Corzine (33 percent) than Christie (21 percent).

There may have been a bit of a "hold your nose and vote" sentiment for a third of New Jersey voters who said their vote was against their candidate's opponent rather than for their own candidate. Most of Corzine's voters said they were voting more to support him rather than against his opponents. But four in 10 Christie voters said their vote for him was against Corzine and Daggett.

Jennifer De Pinto is manager of election and survey information for CBS News. Poll Positions is weekly Hotsheet feature on polling trends from the CBS News Survey and Polling Unit. Click here for more posts from the series.