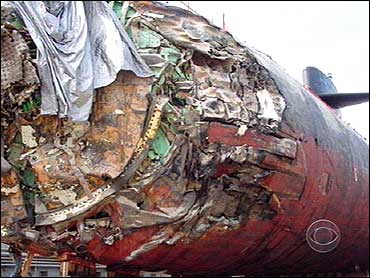 That's exactly what happened to the USS San Francisco last January, when it struck an undersea mountain in one of the worst accidents in modern naval history. How does a submarine run into a mountain? And whose fault was it?

The crew of the USS San Francisco tell how they survived 52 harrowing hours at sea.

After the accident, the entire bow of the USS San Francisco, a $1 billion, fast-attack nuclear submarine, was shattered.

"We took a full frontal hit," says Cmdr. Kevin Mooney, who was the submarine's captain on the day of the crash. "I think we came pretty close [to losing that submarine]. I do accept full responsibility for the grounding of San Francisco. I expected the Navy to hold me accountable for this horrible accident and they did."

Mooney was a rising star in the submarine force, hand-picked to skipper the San Francisco on its peacetime mission of sneaking around the Pacific and spying on other countries and their navies. In the 13 months since he'd taken command, he'd won accolades for his leadership.

Then, four months ago, Mooney and his crew were sent on a high-speed run from their home port on the Pacific Island of Guam south to Australia for a port visit. They were passing through the Caroline Islands, at a depth of 525 feet, when 7,000 tons of steel with 137 souls on board came to a crashing halt.

"The noise was deafening, initially, [like] an explosion," says Mooney, who was eating lunch in the wardroom. He was thrown across the table. "My first thought was that I was going to die."

"All of a sudden, you find yourself slammed into something and the whole world is shaking," says senior chief Danny Hager, who was in the sub's control room and smashed into the instrument panel. "Immediately, I knew we hit something and it was going to be bad."

"I remember just bodies everywhere," says Petty Officer Brian Barnes, who was standing in the lunch line and was thrown to the deck. "Broken glass, stepping on plates, your shipmates moaning because they're in pain, yelling."

"We had a lot of people thrown, you know, about 20, 25 feet. Those were the guys that were injured the worst, because, you know, there's not very many soft things on a submarine," says Hager.

Those still able began to take stock of the damage. Flooding is what every member of the crew dreaded most. At 525 feet deep, water pressure is 16 times what it is at the surface. If there were any serious leaks in the inner hull, water would come rushing in and doom the ship within minutes.

"The enemy is out there and it's sea water and it's trying to get in," says Mooney.

The crew of the San Francisco performed what's called an emergency blow, pumping air into the sub's ballast tanks to float it to the surface. All eyes turned to Hager, who was monitoring the depth gauge.

"I told them 525 feet 0 acceleration. And I'm waiting, you know, 5 seconds, 10 seconds, I don't know how long it was, you know, 525 feet, 0 acceleration," says Hager. "And it was just absolutely silence in control because they're waiting for me to report that we were accelerating upwards."

What they didn't know at the time was most of their front ballast tanks were destroyed.

"So the forward tanks were ruptured," says Martin. "And that air you were trying to pump into them was just going out into the ocean."

"Just going out into the ocean," says Hager.

Finally, air filled the rear tanks, which slowly began pulling the sub up.

"You could feel the pregnant pause, and then almost the relief when I said 500 feet acceleration upwards," says Hager.

Mooney says it took a few minutes to get the sub to the surface. But that was just the beginning.

"The crew had to get that ship home. An injured crew; a beaten crew," says Mooney. "I think the crew was terrified. There was blood all over the decks."

Ninety-eight of the 137 crew members had been injured, about 20 of them seriously enough that they could no longer man their watch stations. Petty Officer Joey Ashley was the worst off with a massive head injury.

"Basically, he'd flown about 20-25 feet, and struck a pump, head first, and he was in serious critical condition," says Hager.

Mooney radioed for help, but the San Francisco was hundreds of miles from home and there were no ships nearby. Its bow was crushed; its propeller bobbing in and out of the water. And the crew wasn't sure they could keep it from going down.As the hours passed, the crew struggled to put the submarine back in some kind of working order, while at the same time caring for the injured, especially Ashley, who was given an emergency tracheotomy to keep him breathing.

"Everyone kind of switched off with Ashley, and they kind of stayed with him 24/7, round the clock, just holding his hand, taking care of him," says Barnes.

When word came that a rescue helicopter was finally en route, Ashley, who was strapped onto a stretcher in the bowels of the submarine, had to be moved through a labyrinth of tight passageways and up a narrow ladder to an exit hatch 25 feet above the main deck.

"We were cutting off railings and just doing anything we possibly could to ease the passage of that stretcher from where he was down in the crew's mess up to the area right below the bridge hatch," says Mooney.

"The water was washing over the top of the submarine," says Mooney. "We were unable to get him [Ashley] in his stretcher through the bridge hatch … couldn't squeeze it through."

Ashley clung to life for more than 24 hours, but the failed attempt to airlift him off the sub had literally been his last gasp.

"When they brought him back down from that was when they lost him," says Hager. "Pretty sad. [He was] one of the best on board."

The crew had no choice but to press on, and the sub, once capable of doing 40 miles an hour under water, limped home on the surface at only 10 miles an hour. Mooney says it took "52 hours from when we grounded to when we moored in Guam."

Now the San Francisco sits in dry dock on the island of Guam. You can't see the worst of the damage anymore, because a huge steel shield has been placed over the bow to make it seaworthy enough to sail to the States for permanent repairs. It will probably cost $100 million and take two years to put the San Francisco back in service.

So, how could this accident have happened?

For all their sophistication, nuclear-powered submarines run virtually blind to what's in front of them, relying mostly on their charts to navigate safely. They could use sonar to detect an obstacle, but its distinctive ping would give the sub's location away and violate the submariner's rule: run silent, run deep.

The Navy's investigation blamed Mooney for using "poor judgment" in his navigation of the San Francisco. It went on to say he "failed to appreciate potential hazards," went too fast, and most importantly, "failed to review…" his "…charts adequately." He was relieved of his command and given a career-ending letter of reprimand

"The real punishment for me is that I have to carry the consequences of this grounding with me the rest of my life, particularly the death of Petty Officer Ashley," says Mooney.

There's now a video tribute to Ashley at the Navy Memorial in Washington D.C.

You might think his parents, Dan and Vicki, would blame Mooney for their son's death, but they have forgiven him his mistakes, and believe some of the responsibility for what happened goes much higher in the Navy.

The Navy investigation didn't exactly admit to making a mistake, but it did find that an omission on one of its charts "directly contributed to the grounding."

The chart the San Francisco was using when it ran into the mountain is one in a series of bottom contour charts that the Navy considers the most complete and accurate for underwater navigation. It's not available to the public, but Martin said he could see the course Mooney followed and the exact spot where the collision occurred, and there's no sign of anything on the chart resembling an undersea mountain.

There were other charts on board that clearly show a navigation hazard near where the San Francisco grounded. And the Navy says Mooney and his team were required to look at all the charts, not to rely on the accuracy of just the one.

"My biggest mistake or the area where I fell short the most, I think, it was I did not have a healthy skepticism on the accuracy of the charts," says Mooney. "Had I appreciated that the charts really are not that accurate, then I would have navigated my ship more prudently."

It turns out Mooney wasn't the only one who trusted the faulty chart. So did the submarine headquarters, which laid out the route the sub was to follow from Guam to Australia, a route which pointed it straight at the mountain, a route that another report said, "did not follow an optimal track."

"And that's your fault?" asks Martin.

It's what the Navy calls "the essence of command" – the buck stops with the captain of the ship.

"The standard that the submarine force holds me and every other person to are high because they have to be," says Mooney. "We can't afford to have another San Francisco."