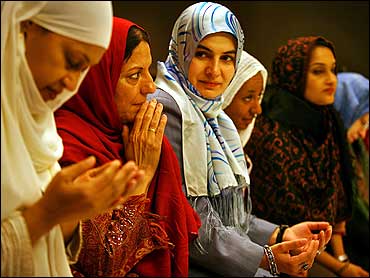 This column was written by The Nation's Katha Pollitt


I didn't review Phyllis Chesler's "The Death of Feminism" when it came out more than a year ago, and that was a mistake. The book, which accused American feminists of ignoring the oppression of Muslim women out of a combination of multicultural piety and anti-Americanism, was such a slapdash, narcissistic mess I thought it would sink of its own accord. How, for example, could anyone take seriously an analysis of Muslim gender relations, based on the author's account of her marriage to an Afghan almost fifty years ago? If I tried to describe, say, Catholic attitudes toward women on the basis of my 1974 romance with the bartender of the Bells of Hell, wouldn't that seem a little, I dunno, self-involved to you?

I know a lot of the feminists Chesler excoriates for imaginary crimes against sisterhood; in fact, I came in for several pages of rather unhinged abuse myself. I just couldn't believe anyone would give the book the time of day. How seriously can you take a writer who has turned herself into a tax-deductible "organization" for which she solicits donations on her Web site? Is that even legal?

In a way I was right. The book tanked. But its argument has taken on a life of its own. That selfish Western feminists have abandoned Muslim women has become a truism on the right. Well, with Iraq a shambles and Afghanistan on its way to becoming a Taliban-friendly narco-state, these can't be happy days for the proponents of gunpoint liberation. You can see how it would go in the offices of The Weekly Standard: Hmmm... maybe invading countries and killing a lot of innocent people isn't the way to get women out of those burqas? Oh, never mind, here's a piece by Christina Hoff Sommers blaming American feminists for turning their backs on female victims of "lashings, stonings, and honor killings" in the Muslim world. Whew!

According to Sommers's "The Subjection of Islamic Women and the Fecklessness of American Feminism" the major obstacles in the path of Muslim women's progress are Eve Ensler, Barbara Ehrenreich, the National Organization for Women and me. She attacks any feminist, basically, who either concentrates on domestic issues, as NOW does, or who makes theoretical connections between the situation of women in the West and elsewhere.

(I was bashed for my introduction to "Nothing Sacred: Women Respond to Religious Fundamentalism and Terror," an anthology edited by Nation executive editor Betsy Reed, in which I wrote of a "common thread of misogyny" in modern fundamentalist movements. Sommers accuses me of placing the Taliban and "Christian evangelicals" "on the same plane." Actually, I mentioned Focus on the Family, the Christian Coalition and the Promise Keepers, hardly synonyms for "evangelicals," but in any case, to note a common thread between phenomena is not to equate them. And in fact, in case you were wondering, I don't equate them.)

Is there any truth to the charges? I write a lot about Muslim women's human rights in this space — I guess The Weekly Standard doesn't subscribe to The Nation — and have found that just about the only Americans who do the heavy lifting on these issues are feminists, although (see the otherwise excellent columns of Nicholas Kristof) they often don't get credit. Sommers mentions the high-profile case of Mukhtar Mai, the Pakistani woman who was gang-raped by order of a tribal council. According to Pakistani journalist Rafia Zakaria, a volunteer with the Asian American Network Against Abuse of Human Rights (ANAA), which helped bring Mai to the United States, Western feminists, from Equality Now and Amnesty International all the way over to Cynthia Leive at Glamour, gave "enormous support" while State Department officials were "often openly callous."

Still, Western feminism is a pretty big tent: If you go looking for someone to say female genital mutilation or child marriage is "just their culture," you can find her (of course, you can find a lot more people who aren't feminists who will say the same). Academic feminists can split hairs with the best, and that can be frustrating. And face it, our big national organizations have some odd priorities. I winced when Sommers mocked NOW for promoting "Love Your Body Day." La-di-da!

As usual, though, Sommers hasn't done her homework. Women's eNews has a whole Arabic section. Ms. is chock-full of articles about Muslim women. Through "The Vagina Monologues," which drives the proper ladies of the Independent Women's Forum wild every year around Valentine's Day, Sommers's bête noire Eve Ensler raises a ton of money for women's groups in the Muslim world. Equality Now, one of the few groups Sommers likes, operates on the very principle Sommers mocks, that patriarchy exists all over the world. And guess who supported the Women's Islamic Initiative in Spirituality and Equity conference, which Sommers praises at length? The Ms. Foundation! The very organization she accuses in her opening of neglecting Muslim women!

It's all very well to accuse American feminists of hating the West. But actually, U.S. invasions have made the work of Muslim feminists much more difficult. The last thing they need is for women's rights to be branded as the tool of the invaders and occupiers and cultural imperialists. That is why feminists from Egypt to Iran are leery of seeming too close to the West; Zakaria wants me to make clear her group gets no U.S. government support. And that is why smart Western feminists support Muslim women's rights through carefully targeted international campaigns and by lending quiet support to groups on the ground, by funding schools and battered women's shelters and microenterprises rather than rushing in and telling everyone how to live.

Oh, and by pressuring the U.S. government, which is, after all, our own, to live up to its egalitarian rhetoric in its foreign aid. "In the 3.7 billion dollars that has been given" to General Musharraf, Zakaria writes, "nothing has been made contingent on improving conditions for Pakistani women."

How about it, Phyllis? Christina? See you in front of the White House about that?
By Katha Pollitt
Reprinted with permission from The Nation