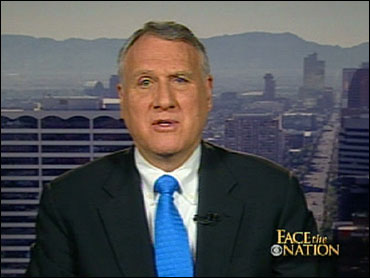 Somebody's not telling the truth - and it happened in the Oval Office. Sounds like a good mystery that the press corps would just love to solve. My guess, though, is it will remain forever a case of he said/he said.

It started last week when Republican Sen. Jon Kyl said at a town hall in Tempe, Ariz. that during a recent private meeting in the Oval Office the president said: "The problem is, if we secure the border, then you all won't have any reason to support 'comprehensive immigration reform.'" In other words, Kyl said, the president is holding border security hostage to comprehensive reform.

It's getting alot of attention on YouTube - you can hear people in the audience gasp when Kyl makes the claim. And there's a lot of outrage in the conservative blogosphere.

I asked Deputy Press Secretary Bill Burton (subbing for Robert Gibbs) about it today at the briefing. "Kyl knows the president didn't say that," Burton said. He would not say exactly what it was the president DID say (Burton said he was not present at the meeting), and he deflected a question about whether Kyl lied.

Afterward Kyl's office said the senator is sticking to his guns.

Any way to resolve this? Unfortunately, no, unless one of the two people in the Oval Office that day recants. Fat chance of that.

And Burton confirmed on the record what White House reporters have openly wondered about since the days of Richard Nixon: There is NOT, Burton insisted, a recording system in the Oval Office.

On the other hand, and sorry to sound like a conspiracy theorist, but if there were, would he even know?