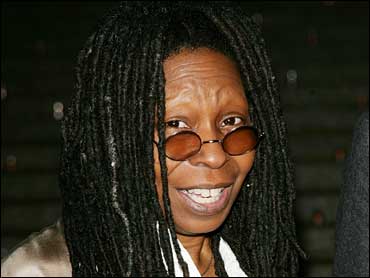 So much for a sedate alternative to Rosie O'Donnell on "The View."

Goldberg said that "from where he comes from" in the South, dogfighting isn't that unusual.

"It's like cockfighting in Puerto Rico," she said. "There are certain things that are indicative to certain parts of the country."

The Atlanta Falcons quarterback pleaded guilty last week to federal dogfighting charges, admitting that he provided money for a dogfighting ring that operated on his Virginia property and helped kill six or eight pit bulls. Vick grew up in Newport News, Va.

Goldberg was selected by series creator Barbara Walters to replace O'Donnell, whose stormy tenure on the ABC program lasted less than a year.

In the Vick discussion, Goldberg served notice that she won't shy away from controversy.

"How about dog torture and dog murdering?" Behar asked.

For many people, dogs are sport, Goldberg replied, and it appeared it took a while for Vick to realize that he was up against serious charges.

"I just thought it was interesting, because it seemed like a light went off in his head when he realized this was something that the entire country didn't appreciate," she said.

Vick has been suspended indefinitely by the National Football League and will be sentenced on the dogfighting charges in December. He apologized and asked for forgiveness upon entering his plea in federal court.