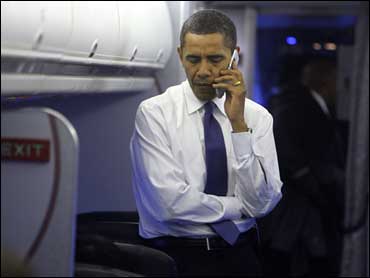 For Democrats, the choice of the next party chairman will likely be quick and simple. Republicans won't have it so easy. The scramble for the chairmanship of the Republican National Committee is likely to be prolonged and complicated.

Traditionally, the president's party defers to his preference for chairman so when Barack Obama announces his pick, his word will almost certainly be final. But for the GOP, out of power in both chambers of Congress and the White House, the choice of party chair is more consequential - and more difficult. In addition to being the party's top fundraiser, the RNC chair will also be an important new spokesman for the GOP, and will play a key role in organizing the party's strategy for opposing the new administration and Congress.

So far, the list of candidates for the job is long and it's widely expected to grow longer. Republicans say several state party chairs, including South Carolina's Katon Dawson, Michigan's Saul Anuzis and Texas's Tina Benkiser, are already making phone calls to solicit support for their bids, along with former Maryland Lieutenant Governor Michael Steele, who currently chairs the conservative group GOPAC. Mike Duncan, the current RNC chair, is expected to seek another stint at the helm, though he has not yet publicly confirmed his intentions.

"You've got half a dozen people out there making calls, and it seems like every day there is someone who's a little more in or a little less in," said Benkiser, who explained that she has not made a final decision to run but is leaning toward taking the plunge. "Right now I think that I am as capable as anyone out there - and quite frankly, more so, having been in a state that's been successful despite what's happened nationally."

Yob and Saltsman are making calls to gauge support for their possible candidacies, and Nussle has been holding meetings this week to consider his options. Dawson, who is campaigning more openly, is holding a conference in Myrtle Beach, S.C., this weekend to discuss the future of the party.

Though Duncan, the incumbent chair, is not quietly stepping aside, leading Republicans were split over the prospect of him serving another term as party chair. Some said his administrative skills and fundraising abilities made him a natural choice, but others suggested it would be necessary to bring in a new, more charismatic face for the party.

"I think Mike has done a pretty good job with what he's had to work with," said Stewart Iverson, the Iowa Republican Party chairman. "The last couple years have been pretty tough years for Republicans in general."

"Mike pays attention to detail," Robertson said. "He is a working chairman and he has an intimate knowledge of what goes on within the Republican National Committee, and I think that's sort of the hands-on leadership that needs to continue."
Other GOP officials suggested, though, that Duncan's shortcomings as a political communicator left room for new leadership at the top.

Robin Smith, who chairs the Tennessee Republican Party, said Duncan was "a very strong, administrative, internal hand," but argued that the party needed "a little more of that charismatic ability."

"I do think the party is going to have to take a couple more risks in terms of being a little more outspoken," she said.

For Republicans seeking a powerful communicator at the top of the RNC, Steele and former House Speaker Newt Gingrich have stood out as possible candidates for the job. Gingrich, however, issued a statement Tuesday disavowing any interest in the chairmanship.

One Republican strategist who supports Steele and expects that the Marylander will pursue the chairmanship called him "one of the best communicators that this party has."

"The grassroots base of the party knows who he is and is enthusiastic about him," said the strategist.

Some Republicans, however, cautioned against taking any candidates' early moves too seriously, suggesting that the field of contenders would expand and thin repeatedly in the coming months.

"I would imagine there are going to be more trial balloons in this thing than at the county fair," said Ron Nehring, the chairman of the California Republican Party.

Smith, who said she had already heard from Anuzis, Dawson, Saltsman and Yob about potential bids, agreed that it was too early to accurately gauge the political landscape.

"I do believe there are names that are going to be added to this list that we have not even heard," she said.

Another Republican official suggested that the candidates who declared earliest might find themselves subjected to unwanted scrutiny, and some of the later entrants could wind up with an edge.

"I would caution people not to throw their hat in the ring too early," the official said, adding that the media would "pick apart" candidates for the chairmanship.

As active as the campaign for the chairmanship is behind closed doors, it is almost as active online, with websites and Facebook groups cropping up to support or draft candidacies by Steele, Gingrich, Saltsman and New Hampshire Sen. John Sununu, who was defeated for reelection on Nov. 4.

The 168 members of the Republican National Committee will vote in January to settle on a single candidate for the job.

On the Democratic side, there is really only one voter who matters, and Barack Obama has not yet signaled who he intends to put in charge of the DNC. And with just over two months until Inauguration Day and an entire government to appoint, the president-elect may not be in a rush to fill the office of DNC chair.

Some have also suggested that Obama could designate a higher-profile general chairman for the party, while Tewes, Hildebrand or another strategist managed the day-to-day operations at DNC headquarters. During part of President Bill Clinton's administration, Sen. Chris Dodd served as the general chairman for the party while Donald Fowler managed the DNC more directly as national chairman.

"Barack and I have never had a conversation about this," McCaskill told the Kansas City Star.
By Alexander Burns