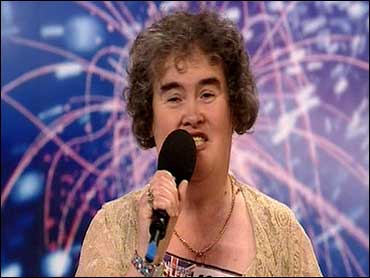 A battle is shaping up over the release of Scottish singer Susan Boyle's debut album.

Boyle has told sources that she would like to debut the album, which comes out in late November, on the BBC radio show hosted by her idol, Broadway and West End musical legend Elaine Paige.

However, her boss Simon Cowell has plans for a high-profile launch, possibly on his UK talent show " X Factor."

Boyle has made no secret of her admiration for Paige, known for her association with Andrew Lloyd Webber and her role in his production of " Sunset Boulevard." She has said that Paige's music kept her going through many difficult times her in her life.

"I have all her albums and love the way she uses every lyric to translate the story," Boyle said.

Debuting the album on the radio show would be a way for Boyle to thank Paige for coming to see her live on a U.S. TV show, where the two finally met.

In any event, Paige will get an exclusive interview with Boyle, though it may not be the first one after the album is released.