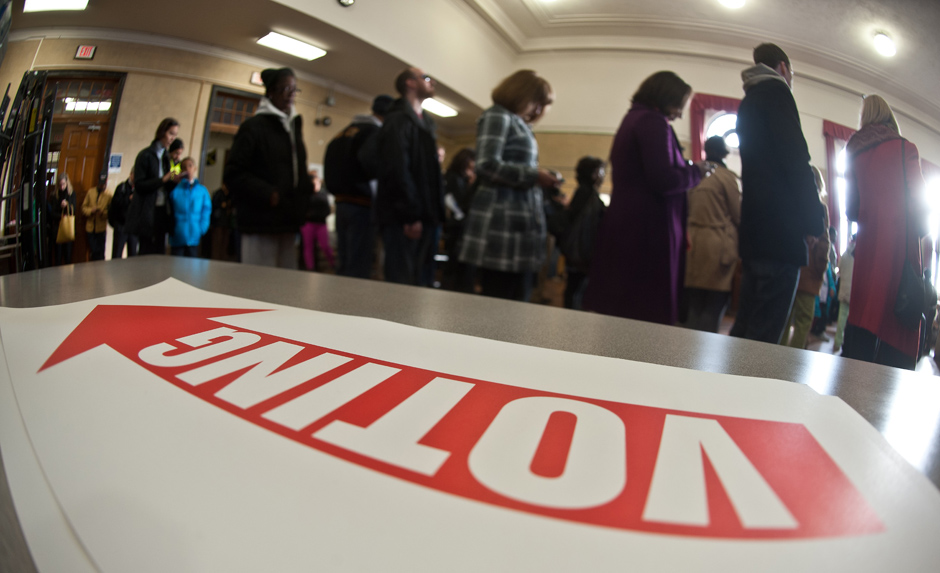 When President Obama was reelected one of the explanations was "demographics," the idea that America's growing population of younger and minority voters now held sway while Romney was left with a shrinking set of older and white voters. But population growth is only part of that story. Millions of eligible voters sat out 2012, including five million fewer white voters compared to 2008, and that magnified the impact of the minority voters who did show up.

Fewer white voters came out in 2012 than 2008, but almost the same total number of black voters turned out. The estimated number of white votes went from about 102 million in 2008 to an estimated 97 million in 2012, a decline of five million, while in both 2012 and 2008, about 16 million black voters cast ballots, with a decline of only a couple hundred thousand last year. As a percent decline, of course, we also see this as a dramatic difference: a decline of about five percent in the number of white votes from four years ago, and of about one percent in the black vote.

Nationwide, that decline in white voters, when compared to 2008, did not by itself cost Mitt Romney the election. If they'd all shown up and split toward Romney at the same rate 2012's white voters did, or more, Mr. Obama still would have won - though things certainly would have gotten closer.

To arrive at these figures we looked at the most recent data available from registrars and secretaries of state on who voted and who didn't, based on turnout.

That offers a different approach than looking at turnout percentages from a survey and self reported voting, as the Census has recently done.** In either case we see the electorate underwent some important changes.

Some of the shift last year was also due to new voters coming in to replace those that dropped out. If we look at everyone on the rolls in both 2008 and 2012, we see that blacks also converted from potential voters in 2008 to actual voters over the last cycle at slightly better rates. Six percent of whites who voted in 2012 had been registered back in 2008 but hadn't turned out then; this time they did. In 2012, seven percent of the blacks who voted had stayed home in 2008 - a slightly higher rate. The Obama campaign was celebrated for its supposed ability to target and turn out its potential voters, and this may be some added evidence of that.

We can also look at this state by state, and there you see the difference that whites staying home really made in the Electoral College. Consider Florida, which is an especially good example. It's turnout rate percentage went down, because voting didn't keep pace with its fast population growth. Yet it did cast a few more ballots in 2012 than 2008 (80,000 more) and the composition of its electorate changed quite a bit. The most up-to-date official records indicate a quarter-million fewer whites voted as compared to 2008, while 51,000 more blacks participated than did in 2008. Obama would still have won, though more narrowly, if those white voters had shown up and backed Romney at the same rate other white Floridians did.

The result was a very different coalition for Mr. Obama's narrow win.

Only half of his voters were white as he won this time, whereas 58 percent of them were white when he won in 2008. This time his coalition was more Hispanic, going from 20 percent to 25 percent based on the exit polls.

And finally we can examine the key state of Ohio. It's a similar story: the number of whites declines, and the number of blacks held steady; a clear advantage for the Obama campaign.

There are a number of ways to make estimates, and what we've presented here is but one of them, but examinations of 2012 have more or less pointed in this same general direction, even if they vary on the percentages or impact: the racial composition of the electorate shifted from 2008, probably to the Democrats' advantage. But this is not just a story about growth in some segments of the electorate. It is just as much a story of who chose to stay home, and when white voters did, it gave even more momentum to underlying demographic shifts.

**These numbers are drawn from data compiled by Catalist, LLC, and made available through a partnership with Harvard University. The records are up-to-date as of print, but small changes in the figures reported by state officials may occur over the next several months. Eight southern states, including Florida, track individuals' race/ethnicity and put this information in the voter file. For all other states, Catalist estimates the race of every registrant using neighborhood Census data.