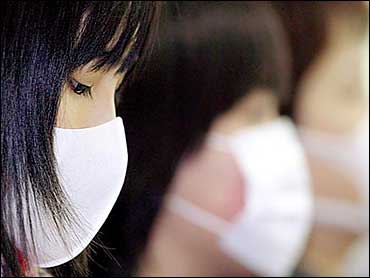 The World Health Organization said Thursday the global SARS outbreak may be nearing an end, and hard-hit Hong Kong reported no new infections or deaths for the first day since March.

However, the WHO cautioned that the disease is not yet controlled in Taiwan. In Canada, authorities tested 23 people from two facilities for the elderly in Ontario for SARS symptoms and hundreds more were quarantined as a precaution.

In Beijing, a visiting WHO official said China has provided information on its handling of SARS cases to encourage the agency to lift a travel advisory.

Hitoshi Oshitani, the WHO regional adviser in communicable diseases and SARS preparedness, said that only seven new SARS cases were reported worldwide on Wednesday, suggesting the end of epidemic could be near.

"In terms of the number of cases (worldwide), we are seeing the end of the outbreak," Oshitani told reporters Thursday in Manila.

The global death toll stood at 791 out of more than 8,300 cases reported since severe acute respiratory syndrome first appeared in southern China in November. Most infections have been in mainland China and Hong Kong.

Oshitani said the situation in China was "under control," but was not in Taiwan as new cases were still being reported.

Taiwan's outbreak began later than China and Hong Kong's, and while numbers of new cases have declined in recent weeks, the island reported two more SARS infections Thursday to bring its cumulative total to 688, of whom 81 have died.

Hong Kong has reported four days with no new SARS infections since it began daily reports on March 12, but Thursday was the first with both no new infections or deaths. It was also the 28th straight day that the number of new cases has been below five.

WHO officials are to visit Hong Kong this weekend and health authorities here said they plan to discuss the territory's progress in meeting criteria for being removed from the WHO's list of SARS-affected areas during the visit.

"We are hopeful we should be able to do that," said Dr. Yeoh Eng-kiong, secretary for health, welfare and food. But he cautioned, "Obviously we need some time."

WHO criteria for declaring an area no longer SARS-affected require 20 consecutive days with no new reported infections — a guideline based on a belief that the incubation period for the disease is 10 days.

In Canada, SARS has cost Toronto's tourism industry $190 million, according to a study for the Hotel Association of Canada.

The loss was felt across the tourism sector, but the hotel industry took the brunt of the decline. According to the study, hotel revenue fell by 38 percent.

In Beijing, Dr. David Heymann, WHO's chief communicable disease officer, said China has provided detailed new information on how it records and traces SARS cases that the agency will use when it decides whether to lift its travel advisory on the Chinese capital.

"Some of our concerns about the information coming from China have been answered," Heymann said.

China's daily reports of new SARS cases have fallen to single digits over the past two weeks, down from more than 150 a day in early May. On Thursday, it reported no new cases and one death.

But WHO officials have questioned the sudden, sharp decline in the Chinese figures and said hospitals in hard-hit Beijing failed to record some possible SARS patients.

In Canada, more than 100 people were being monitored due to SARS-like symptoms, including 23 people who were moved from a retirement home in Whitby, Ontario, 40 miles east of Toronto, to hospitals for tests.

"None are critical; they are not suggestive of SARS, but we're checking to make sure," said Dr. Donna Reynolds, a regional health official. She said hundreds of workers and visitors to the two facilities were told to quarantine themselves as a precaution.

Toronto is the epicenter of the biggest outbreak of SARS outside of Asia, with 33 deaths reported so far in two major outbreaks linked to a woman who brought the illness from Hong Kong in early March.