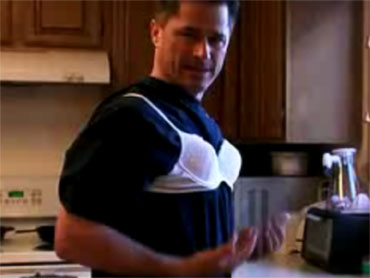 For nearly 90 years, the Montana Power Company exemplified the very best of American capitalism. It provided cheap, reliable electricity for the people of Montana, excellent benefits for thousands of employees and generous, reliable dividends for its stockholders.

Everyone was happy, except for the corporate officers and their Wall Street investment banking firm who decided there was more money to be made in the more glamourous and profitable world of telecommunications.

The result exemplified the worst of American capitalism.

When 60 Minutes first reported this story last February, the cheap electricity, the good jobs and the life savings of a lot of people were gone, along with the name Montana Power.

Its demise may not be the biggest scandal of our time, but to its stockholders, it shows how greed and outright stupidity destroyed one of the oldest and proudest companies in America. Correspondent Steve Kroft reports.

Gary Buchanan is a former Montana legislator who runs an investment firm in Billings. Over the years, he bought and held lots of Montana Power stock for his clients.

What's more, its customers, which was everyone in Montana, had some of the lowest electricity bills in the country. The rates were regulated by the state, and in exchange, Montana Power received a monopoly.

The only people not satisfied with the arrangement were the executives at Montana Power. In 1997, their lobbyist pushed a bill through the state legislature to deregulate the price of electricity and open up the market to competition. It was supposed to be good for the consumers, who could decide who they were going to buy their power from at the lowest possible prices.

But Frank Morrison, a former Montana Supreme Court justice who now represents the stockholders, believes there was another reason. He says Montana Power officials had already decided to get out of the utility business, and were using deregulation to drive up the price of its assets.

"Part of the plan involved going to the legislature and pushing through a bill right at the end of the session, with no deliberation to deregulate power in Montana," says Morrison. "They did that, in order to make the generating assets more valuable on the open market. No price limit on selling power in Montana. Therefore we can go out and sell these generators for more money."

Sure enough, within six months of the bill's passage, the company began selling off its generating assets.

First it sold the company's hydroelectric dams, coal mines and power plants to Pennsylvania Power and Light. Next, Montana Power announced it was selling its transmission and distribution system and getting out of the business entirely.

It was going to join the dot.com revolution by transforming itself into a high-tech telecommunications company called Touch America. The decision was made on the advice of its New York investment banker, Goldman Sachs, without consulting the stockholders.

"Everybody was stunned," says longtime shareholder Marjorie Schmechel. "I mean, the shareholders that I knew were stunned. The employees that I know said that that came completely out of the blue to them."

Schmechel and her brother Mike now owned a stock called Touch America, which had once been a small but profitable telecommunications subsidiary of Montana Power.

Do they think that most of the stockholders knew that their investment had gone from a sort of stodgy, reliable, safe utility stock to a very, very highly speculative, very risky telecom stock?

The company's plan was to take the $2.7 billion dollars raided in the sale of Montana Power's assets, and literally bury the profits in the ground.

The new company, Touch America, was going to lay a 26,000-mile fiber optic network that would carry voice video and data transmission across a dozen western states. It was the brainchild of Montana Power/Touch America CEO Bob Gannon, who was born and bred in Montana.

Why does Morrison thinks that Gannon and Goldman Sachs decided to get out of the energy business and into telecom?

"He was tired of what he thought was a stodgy utility stock. He owned an awful lot of shares. And I think he wanted to be the Bill Gates of Montana," says Morrison. "I think he wanted to get into a high flier situation where he could go to a $100 a share instead of sit there at $30. With Sachs, Goldman Sachs, it was simply money."

It didn't take long before things started to unravel. No sooner had Montana Power sold its dams and power plants, than deregulated electricity prices shot through the roof - and Pennsylvania Power and Light began selling its cheap Montana electricity out of state to the highest bidder.

Electricity prices in Montana doubled, then redoubled, and doubled again - refineries, lumber mills, and the last working copper mine in Butte was forced to suspend operations because they couldn't afford their electricity bills.

"If we were going to continue to run, we were faced with prices that were $150 to $600 a megawatt hour. In other words five to 20 times what we were paying before," says Greg Stricker, a manager at the mine.

That was just the beginning. By getting out of utilities and into telecommunications, Montana Power/Touch America had bought into the biggest stock market bubble in American history. Just before it burst.

Apparently, there was a lot more fiber optic cable in the ground than there were e-mails and phone calls to travel on them. And the billions of dollars buried in the ground are now worth pennies on the dollar, just like the stock.

"It seems counterintuitive, and I will say the word stupid, to sell off the business that you know that is generating income for thousands of employees and providing a steady rate of return for shareholders - for a company that is now worth 53 cents a share," says Margery Schmechel.

Last time 60 Minutes checked, the stock was down to 33 cents.

"Montana Power had 3,000 employees. And now a lot of those are laid off, or transferred or working for different companies," says Mike Schmechel. "It has had a devastating effect on Butte. Many of the retirees are wondering whether their pension benefits are secure. Their savings are certainly not secure. And then there's a lot of uncertainty."

Timmer had to hang up his fishing pole and return to work. Now, he makes a minimum wage driving and loading trucks for a tire company.

And at the M&M, a 24-hour bar and restaurant that hasn't locked its door since the 1880s, people are out for blood.

"The whole thing was just wrong what they did. People here losing money and they have no retirement," says one waitress. "They have nothing coming in. Companies shouldn't be able to do that. I don't think anybody ever thought we'd never have Montana Power."

Some of those involved were in New York City, at the huge Wall Street investment firm of Goldman Sachs. As financial advisors to Montana Power, Goldman Sachs executives made more than 100 trips to Montana urging the company to get out of the utility business. And they made the crucial presentations to the board of directors.

"Bob Gannon could have never sold this plan to the board. He didn't have enough credibility," says Morrison. "I think Goldman Sachs was in it from the beginning. I think they pushed it. They drove the truck, so to speak."

Goldman Sachs declined to comment on this story. But according to its contract with Montana Power, Goldman Sachs was to be paid a flat fee as financial advisor. It was also to be paid a transaction fee or commission on every asset that was sold.

Morrison says that it was in Goldman Sachs best interest to have Gannon and the board sell off the assets: "The evidence is going to show that the weeks would go by and then there would be memos in which Goldman Sachs would just keep pushing, 'This has to be done now. No better time than now. The market for this can only get worse.' But they were definitely the driver. They were pushing it all the time."

Morrison believes Goldman Sachs made about $20 million dollars on the deal, and his lawsuit outlines what he calls an end run around the shareholders.

The firm's contract with Montana Power stipulates that "any advice provided by Goldman Sachs...is exclusively for the information of the Board of Directors and senior management of the company..." Morrison translates that into "don't tell the shareholders."

"Because until this thing was finalized they didn't want people raising questions," he says. "It would be an extremely controversial thing if that got out."

Does Morrison think that Goldman Sachs knew that this was not particularly a good deal for the stockholders? "I don't think they cared very much," he says. "They were making money."

The final insult to the people of Montana came last summer, just days after Touch America announced a second-quarter loss of $30 million dollars. Gannon announced that he and three other executives were going to receive a $5.4 million dollar payout.

"It appears to most people that they're stuffing their pockets with the last of the cash before the ship sinks, and taking the life raft off, and leaving everyone else on board," says Mike Schmechel.

Margery Schmechel tried to raise all of this at the stockholders meeting, which, for the first time, was held outside the state of Montana, in Minneapolis. When Gannon saw her get up to ask a question, the meeting was over.

Gannon spends a lot of his time avoiding people. He wouldn't give 60 Minutes an interview either.

But don't worry too much about Bob Gannon. He's built himself a $3 million dollar home on Flathead Lake, and he has a new three-year contract - if Touch America stays in business that long.

"It's the American way now, unfortunately, that a company can take itself down. And a company can destroy itself, and its shareholders," says Buchanan. "But I think in this case, we have a company that helped take a state down. And I think that's what's fundamentally different here."

After hemorrhaging money and laying off more than half of its workforce, after being de-listed from the New York Stock Exchange, Touch America filed for Chapter 11 Bankruptcy protection in June.

Touch America now plans to sell off all its remaining assets to help finance the 14 lawsuits filed against it.

And remember the M&M, the local Butte bar and restaurant that hadn't locked its doors since the 1880s? It has finally locked them permanently because there wasn't enough money in Butte passing through them.

Surfside condo collapse: Still searching for answers in the rubble