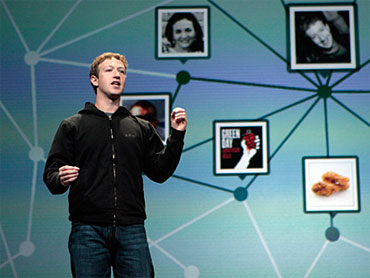 The move came just a few hours before the world premiere of "The Social Network," a movie that portrays the 26-year-old billionaire as a social misfit with few friends.

It's based in part on a book hitting stores Monday, "The Accidental Billionaires: The Founding of Facebook: A Tale of Sex, Money, Genius and Betrayal," by Ben Mezrich. (Read an excerpt.)

Zuckerberg's been called a "loner with 500 million friends." (He said in July that Facebook had passed the 500 million-user mark.)

On "The Early Show on Saturday Morning," Mezrich called Zuckerberg "an interesting guy" who's "very unique."

"Essentially," observed co-anchor Chris Wragge, "you kind of portray him as a guy who's really kind of a loner."

"I spent about a year writing about the story of how Facebook got founded," Mezrich said. "In 'Accidental Billionaires,' you see that he is this genius. But he was very socially awkward, didn't have a lot of friends, and he really wanted to be part of something bigger. He wanted to get into these finals clubs, these secret societies (at Harvard)."

Barred at the gates, Zuckerberg "created his own club, which was Facebook," said Mezrich.

The writer spent a year trying to talk to Zuckerberg). "I called. I talked to his people every day. ... I wish he had (talked to me). He knew I was talking to people who were angry with him. There were a lot of people who felt betrayed by him. In the end, he decided not to. I would have loved it if he had talked to me.

"But I also think it was a very fair portrayal. ... Overall, the book and the movie actually come out in a very positive way."

Mezrich said it's "wonderful for him to give that kind of money to (Newark's) schools. Anytime a school system gets $100 million it's a wonderful thing.

"And good for Mark: He's a kid who's never really cared about money. It's never been a big part about why he did anything. To give away what's really is a significant amount is great."