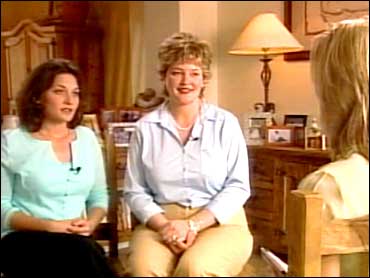 Imagine what you would do if one day you were told that you were the product of a sperm donor; that your father wasn't your biological father. It happened to two sisters in Arizona, and their reactions couldn't have been more different. The Early Show correspondent Tracy Smith reports on their incredible story.

The sisters were featured, along with other children of donor insemination, in last month's issue of Glamour magazine. At least 30,000 babies are born every year in the United States using sperm donations. But with the blessings of this procedure come questions about how and when - if ever - to tell a child. And as it happened in the following story, the answers can be life-changing.

From the time they were little girls, sisters Lauren Trollope and Stacy Brower were inseparable. Wherever Lauren went, little sister Stacy wanted to go, too. They shared almost everything, except their looks.

Brower says, "Anytime anyone would say, 'Oh, you guys don't look anything alike,' she would just say, 'Oh, it's cause she's from the landscaper. I'm from the milkman.'"

Trollope grew into a tall, blonde and Brower into a petite brunette. Brower didn't notice the differences. Trollope did.

Trollope says, "It bothered me to the point that I sincerely thought I didn't belong to the family."

Why Handwriting Changes as You Age

In fact, Trollope believed she had been switched at birth. It wasn't until her senior year in college, long after her parents Allie and Albert Strobel had divorced, that Trollope learned the truth from her mother.

Trollope recalls, "She put me in the car, and drove around the block to a park. She parked her car, turned off the lights, turned off the ignition. And she looked at me, and said, 'He's not your father.'"

It was 1973. Allie and Albert Strobel had been trying for five years to have a baby when they found out that Albert was sterile. They considered adoption, but the waiting lists were too long and Allie desperately wanted to carry a child. So they decided on a little-known procedure at the time: artificial insemination. With the help of their doctor, Allie got pregnant using an anonymous donor's sperm. And the Strobels were on their way to being parents.

Albert Strobel says, "From the moment that I was told by the doctor that my wife was pregnant, they were mine."

Lauren was born April 19, 1974. Four years later, with the help of another anonymous donor, Stacy arrived. Doctors made Albert and Allie Strobel sign a contract promising to keep the truth of their daughter's conception a secret.

Albert Strobel says, "Back then, the concern was it's a biological process that they wouldn't understand."

Lauren Brower says, "This was the story! And I was so happy for her to tell me this story. I wasn't angry. I was ecstatic that I had the truth."

But secrets can be both a gift and a weapon. The truth that brought Lauren Trollope such happiness was kept from Stacy Brower, because their mother said she wouldn't be able to handle it. Two years later, Stacy finally learned "the family secret," and she was devastated.

She says, "I have never been so mad, so hurt in my entire life. I was, I couldn't believe it. I couldn't even understand what I was being told. But I knew that I had been lied to."

Brower says, "She was standing in the hallway. And I said, 'You're not even my sister.'"

Crying, Trollope says, "I think that even till this day, the words sit in my heart, knowing that she had said that to me."

But soon Stacy Brower realized their relationship was much more than biology.

"Well, it definitely brought us closer," she says, "I felt the only person I could confide in, and actually learn how to deal with it was to go to my sister."

Today, Lauren Brower has kids of her own, who call Albert Strobel "grandpa."

Albert Strobel notes, "I was her dad and was the only dad she ever had and the only one she ever would have. And biology didn't matter."

But both girls wish their parents had shared the secret sooner, because both are desperate to find their donor fathers.

Lauren Trollope adds, "If there is something that runs in his background that could eventually be carried on to my children. They have the right to know."

Though they both know it is not very likely that they would ever find their donor fathers. Stacy Brower says, "The donor would almost have to be looking for us, for us to be able to find him."

That's because 25 to 30 years ago, records on sperm donors were rarely kept. And Lauren and Stacy's biological fathers may not want to be found. But as they continue searching, these two sisters have already found something else: sisterhood.

Both sisters believe parents should tell children as early as possible. In fact, Lauren Trollope has written a children's book to help parents with this issue.