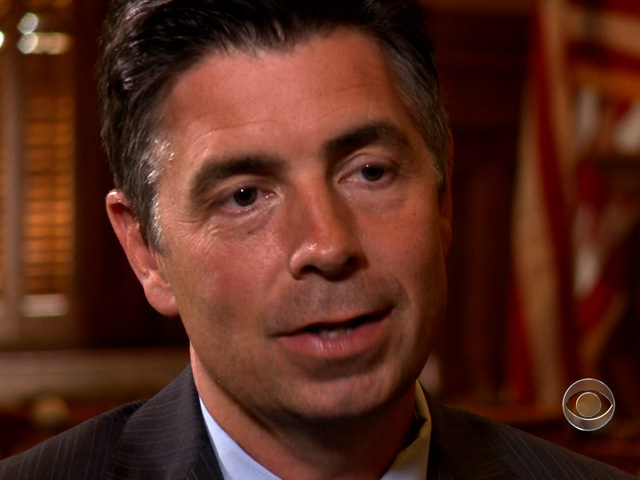 ALEC stands for American Legislative Exchange Council, a 30-year-old non-profit think tank that brings together and educates conservative state lawmakers across the country.

Critics, from the Center For Media and Democracy to Common Cause, consider ALEC a corporate bill mill and accuse it of being a de facto corporate lobbyist.

We sat down with Rogers this week for an interview on the floor of the Georgia State Senate, where he is Republican majority leader, to find out what ALEC is really about.

About 300 companies sponsor ALEC and collectively contribute at least $7 million a year, or most if its operating costs.

ALEC member companies are a Who's Who of the Fortune 500: tobacco giants Altria Group (formerly Philip Morris) and Reynolds American; telecommunications leaders AT&T and Verizon; energy conglomerates ExxonMobil, Chevron, and Koch Industries; big pharmaceutical firms Bayer and Pfizer; State Farm insurance and United Parcel Service. None of the companies on ALEC's corporate board would grant us an interview.

What ALEC does for legislators is create model bills mostly on fiscal issues that are templates for 800 to 1,000 bills introduced in the 50 state legislatures every year. ALEC has claimed to members that 20 percent its bills become laws.

"If you talk to any small business owner, they'll tell you how to grow their business is they need less taxation, less regulation, and less litigation," Rogers said. "They don't want to spend their time in courtroom defending honest business practices."

But at least 20 companies cut ties with ALEC this year after it had drifted into non-economic issues such as "stand your ground" self-defense laws and strict photo voter identification laws.

ALEC had no role implementing the stand your ground law in Florida, where teenager Trayvon Martin was allegedly shot by neighborhood watchman George Zimmerman, who has asserted a "stand your ground" defense. But ALEC did create a similar model bill after Florida's law.

"If you talk about, for example, Second Amendment rights, there are many people, myself included, who would say that is limited government," Rogers said. ALEC opponents, he added, "used a tragedy to further their cause, and their cause is to destroy a conservative organization."

ALEC has had a hand in the rush of strict photo ID laws which have passed in nine Republican-led states in the past two years in the name of preventing voter fraud, a rarely documented crime. Critics say these laws, which require voters to obtain a driver's license or government-issued ID card, can create a burden for minorities, youth, and the poor, which happen to be Democratic-leaning demographic groups.

"Simply telling the person who is taking your vote who you are is not much of a burden, and at the end of the day, if you're allowing one person to vote illegally, you've just cancelled out my vote," Rogers said. "It's really common sense - if you are going to vote, tell us who you are."

Voter ID was an issue that led Wal-Mart to quit ALEC, telling the group in a letter it had weighed in "on issues that stray from its core mission." In a statement to CBS News, Wal-Mart mentioned its support of the Voting Rights Act and the company's efforts to help employees register to vote.

Rogers addressed Wal-Mart's concern head on: "If I were to go to Wal-Mart, and I were to attempt to buy a bottle a beer, I would assume that Wal-Mart would ask me for identification. If not, they could lose their license to sell that product. I would hope that most Americans cherish the right to vote a little more than they do the right to buy a bottle of beer. So, I think it is a little disingenuous on Wal-Mart's part in that they're actively engaged in indentifying people using photo ID to suggest that is a reason they no longer want to be actively engaged with ALEC."

Blue Cross Blue Shield, Kraft Foods, and Proctor and Gamble were typical in their statements to CBS NEWS -- simply citing budgetary reasons for their withdrawal.

Rogers said ALEC was leaving its advocacy on those more controversial issues in the past.

"We have a re-focus, and it's strictly going to be specifically on these fiscal issues - limited government, deregulation, lowering government spending, getting rid of debt. ALEC has already made that decision," he said.

An ALEC spokeswoman told CBS that the organization had added 25 new corporate members this year, but declined to reveal their names.

The National Council of State Legislatures has more members than ALEC - over 7,000 legislators -- and the Council on State Governments has private sector associates, but neither of those groups writes model bills or receives ALEC's level of corporate financing.

Rogers, 44, who has spent a decade in the Georgia legislature, told us about 10 of the 200 bills he has introduced were based on ALEC models. One proposed getting Congress to return federal gas tax money to the states from which it originated.

Still, Common Cause, the government watchdog, has filed a complaint with the Internal Revenue Service contending ALEC is really a lobbying group and recommending the IRS revoke the group's non-profit tax status.

Rogers called the claim a false accusation from a liberal critic. "I would much rather have Common Cause just simply be honest and say, 'Look, we don't agree with you on your conservative philosophy, and let's debate this,'" he said.

For Rogers and his ideological cohorts across the country, ALEC remains a powerful resource. He said, "I think ALEC is perfectly positioned to be the pre-eminent legislative force in the country."

Paul Bogosian and Grace Fardella contributed to this story.