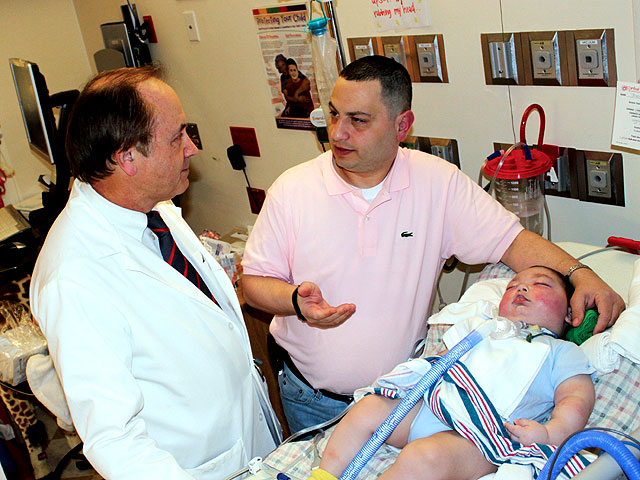 (CBS) For the parents of Baby Joseph, a 14-month-old child in a vegetative state, all they wanted was one more breath.

But Canadian doctors refused to perform a life-saving tracheotomy on the child, forcing his parents to rush to St. Louis for the procedure and setting off a trans-national debate on who has the right to live and who should make the call.

"I would say they think it's a miracle. It's absolutely astounding," said family friend Brother Paul O'Donnell. "He is on a lot less medication. He is doing phenomenal."

Doctors agree that no matter what care Baby Joseph receives, he will not survive the neurological disorder called Leigh Syndrome, a rare genetic disease which attacks the nervous system. It most often strikes children between three months and two years old. Victims lose motor skills, can have seizures and often suffer from impaired respiratory and kidney function. Most die within a year, but some live far longer.

Joseph's parents know the disease well. They lost an 18-month-old child to the same disease eight years ago. They felt a tracheotomy would help Baby Joseph live another six months and then die at home, as it had done for their other child.

But doctors at London Health Sciences Centre in Ontario, who treated Baby Joseph since October, felt he was in a permanent vegetative state and that his condition was deteriorating.

"This is a baby that when his father was talking to him on one side of the room he'd look to his father, and when his mother spoke he'd look to her," said O'Donnell, who also said he has seen the child throw temper tantrums when, for example, he gets changed when he doesn't want to.

The hospital planned to take him off of assisted breathing. His parents sued and lost in Canadian courts. So the Maraachlis turned to social media, eventually connecting with Rev. Frank Pavone of New York City-based Priests for Life. Pavone offered to pay for Baby Joseph's transfer to Cardinal Glennon Children's Medical Center in St. Louis.

St. Louis doctors said the tracheotomy they performed last month provides Joseph with increased mobility and comfort while providing a more stable airway. It protects his lungs from inhaled saliva or other material that could cause aspiration pneumonia. Doctors declined to predict if the procedure will extend Joseph's life but his family believes it could add months.

"So many people from the United States and Canada and all around the world have reached out, sent letters and called my family to let us know they were praying for us and thinking about us," his father Moe Maraachli said. "This has really helped our family through this hard time, to know there is so much kindness in the world."

Baby Joseph is now resting in his home in Windsor, Ontario.

WHAT DO YOU THINK?
Who should be allowed to decide Baby Joseph's fate - Canadian doctors or his parents?