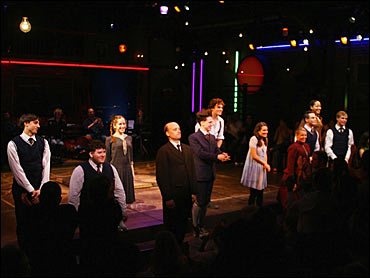 Suspense will be the most likely casualty at Sunday's 2007 Tony Awards when Broadway celebrates the best of the theater season.

"The Coast of Utopia," Tom Stoppard's mammoth, three-part examination of intellectual life in 19th-century Europe, will take the crown for best play. "Spring Awakening," a concertlike pop explosion focusing on the sexual energies and insecurities of the young, has a lock on the best-musical title.

Both shows have dominated this year's parade of awards, prizes, citations and honors that sprout at the end of each season. Anything else will be a major upset during the three-hour telecast by CBS (8-11 p.m. EDT) from Radio City Music Hall.

Certain performers should also be polishing their Tony acceptance speeches.

There doesn't seem to be any doubt that Christine Ebersole's lavishly praised, double-duty performance as an off-kilter mother and her quirky daughter in "Grey Gardens" will take home the actress-musical prize. It's already the stuff of theater legend. For actor-musical, look for Raul Esparza to score for his portrayal of a commitment-adverse bachelor in "Company."

Their performances underscore a busy year that, according to records of the League of American Theatres and Producers, included 12 new musicals, 11 new plays and 12 revivals _ five plays and seven musicals.

The 2006-2007 season included several profitable plays with big stars performing for what producers like to call "a limited season." Among the productions actually ending in the black were "Butley," starring Nathan Lane; "A Moon for the Misbegotten," featuring Kevin Spacey and likely Tony winner Eve Best; and even "The Vertical Hour," starring Julianne Moore. David Hare's play, even though it closed early, paid back its production costs, despite reviews that were mixed at best.

The diversity of the musical season was reflected in the four best-musical nominees. Besides "Spring Awakening" and "Grey Gardens," there were "Curtains," a good, old-fashioned salute to Broadway razzmatazz, and "Mary Poppins," the Disney-Cameron Mackintosh extravaganza that brought the P.L. Travers novels and celebrated 1964 film to life.

The other best-play nominations went to "`Frost-Nixon"; "Radio Golf," the final chapter in August Wilson's 10-play look at the black experience in 20th-century America; and "The Little Dog Laughed," Douglas Carter Beane's dissection of Hollywood hypocrisy. "Dog" was something rare on Broadway _ a comedy, and it faltered at the box office despite the hilarious performance of its leading lady, Julie White (another Tony nominee).

The season had bigger fizzles, particularly of the musical variety. Set to close June 17, the critically maligned "Pirate Queen" (which came up empty-handed when the Tony nominations were announced), seems likely to lose most of its millions _ reportedly in the area of $16 million.

"High Fidelity," based on the successful movie, was a $10 million, two-week flop, while the short-lived "Coram Boy," a lavish import from London's National Theatre, apparently dropped around $6 million, believed to be a record for a play.

And the season's most disappointing engagement was the critically praised revival of "Journey's End." R.C. Sherriff's World War I trench drama got mostly favorable reviews _ some of the best of the season _ but audiences stayed away. The production closes Sunday, the same day it most likely will win the Tony for best revival of a play.