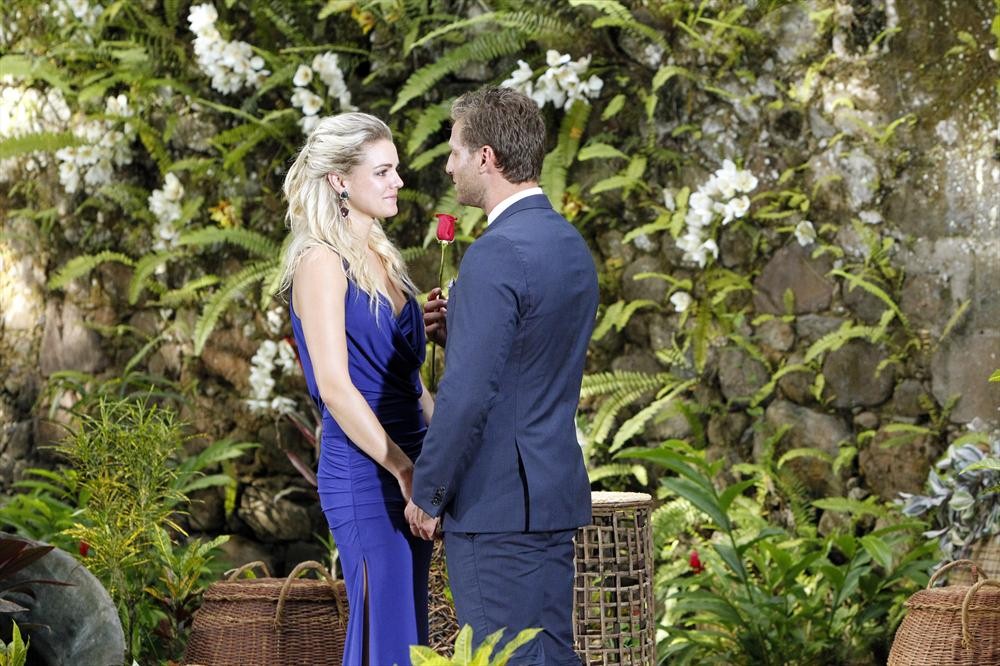 "The Bachelor's" Juan Pablo Galavis has spent weeks looking for love among 27 women vying for his affection, and after narrowing it down between pediatric nurse Nikki and hairdresser Clare, Juan Pablo gave his final rose to Nikki. But did he propose?

Juan Pablo, the 32-year-old Venezuelan former pro soccer player and single father to an adorable four-year-old daughter, started off the finale by bringing Clare and Nikki to meet his extended family in Saint Lucia.


Clare, 32, was the first to meet his family, and even had intimate conversations with Juan Pablo's mother, father and brother where they welcomed her with open arms. However, they warned Clare in round-about ways, that Juan Pablo might not be the easiest person to start a relationship with.

However, the conversations opened Clare's eyes to the idea that when Juan Pablo says something blunt or what some might call mean, he's just being "honest."

"I could one thousand percent see myself as part of Juan Pablo's family forever," Clare said after the drama-free family gathering.

Nikki, 26,had briefly met Juan Pablo's family before, but now she was given the opportunity to sit down with them and talk about her future with Juan Pablo.

While they were warm and welcoming for Nikki as well, they also warned Nikki that Juan Pablo could be stubborn and, as Juan Pablo's father said, "He's not an easy guy."

Related: "Bachelor" Juan Pablo gets his speed on at Daytona

"How much fighting can you take? Because Juan Pablo, I love the guy, he's a really great guy, but sometimes when things are getting rough, he walks away from the relationship," asked another of Juan Pablo's relatives. "How will you deal with that?"

"I feel like we'd fight well together," Nikki responded, laughing.

After both families got to spend time with the two women, they still had no idea who Juan Pablo should pick, and it was clear that The Bachelor himself was stuck in that same position.

In order to choose, he had to go on final dates with both the women, and Clare was up first. What started as a beautiful, romantic helicopter ride quickly derailed when, as they landed, Juan Pablo leaned over and whispered something into Clare's ear that really changed the mood.

"I don't have words for it, how I feel right now. He chose to tell me something that no woman wants to hear. That he really doesn't know me and some sexual thing I don't want to repeat. It was insulting, it was offensive and it just made me feel awful," a clearly upset Clare told the cameras.

Related: "The Bachelor" says gays shouldn't be on the show

"I'm not just an object. Maybe I have him all wrong. ... I am so confused right now and I really don't know what to do next," she added. "I thought this was going to be one of the most romantic moments of my life but it wasn't."

After the date, Clare revealed that Juan Pablo told her that they don't seem to know each other at all, but that he loved hooking up with her. For Clare, this was a massive blow to her conception of their relationship.

Later, Juan Pablo came to her room at night to discuss what was upsetting her.

"You could've said anything in the world. No mics, no cameras, no people, and what did you tell me? You made a comment about stuff that happened with us in private," Clare told Juan Pablo. "You said that we have good chemistry. You told me that you don't know me at all and I don't know you at all."

Juan Pablo defended himself by saying he was just being honest, but it was clear that the dynamic had shifted in their relationship.

Next "ET": Is Juan Pablo the most hated Bachelor?

But soon, Juan Pablo began opening up. He explained to Clare that this decision was a tough one for him, especially with his daughter in the equation, and showing that softer side was all it took for Clare to take him back into her heart.

The next day, Nikki and Juan Pablo went on their date, a romantic trip out to sea on a catamaran, and the date seemed to go much smoother than his date with Clare. At the very least, there was a lot more kissing.

Later, when Juan Pablo came around to Nikki's house, the tensions rose as Nikki wanted to hear Juan Pablo say he loved her, and realized how sad she would be if she didn't end up with him. It was an emotional moment that appeared difficult for Juan Pablo to handle.

And finally, after everything, it was the moment of truth. Juan Pablo donned his dapper suit while Clare and Nikki put on their loveliest gowns and got ready for the toughest choice of the season.

Clare was the first girl off the boat, which many saw as an indicator that she would not be going home with Juan Pablo, and those predictions proved accurate. Juan Pablo told her that she wasn't right, and that's when Clare's anger came out.

"I have saved this moment for the man of my dreams and I thought that was you and I thought you knew what kind of man you were," a visibly upset Clare told Juan Pablo. "What you just made me go through, I would never want my children having a father like you.

Tell us: What did you think of the finale?